The outlandish Ford Supervan has returned for 2022, but rather than using a Jaguar XJ220 V6, Cosworth Formula 1 engine or Ford GT40 V8 as did its predecessors, the Supervan 4 is a mega-powered showcase for what is possible with an electric drivetrain.

The new Supervan is loosely based on the recently revealed Ford E-Transit Custom - although only really in name and basic silhouette. Because while that road-going van is likely to be offered with 265bhp in its most potent form, the new one-off creation starring at Goodwood Festival of Speed packs almost eight times that.

Ford quotes an output of 1973bhp - as much as the Lotus Evija - from the quad-motor powertrain and says the Supervan will get from 0-62mph in less than two seconds, far quicker than any of the three previous Supervans. Power comes from a 50kWh battery mounted midships - as were the engines in the combustion Supervans - for optimal weight distribution and it can be charged in just 45 minutes using a standard fast charger.

The powertrain can be operated in one of five modes: Road, Track, Drag, Drift and Rally, with differing power delivery characteristics depending on the intended use. There is also a pit-lane speed limiter and an intriguingly named 'tyre cleaning mode', which locks one axle while spinning the other to create "impressive burnouts" but also to "help clean and warm the tyres before performance runs".

The Supervan 4's capabilities will be showcased at Goodwood by Romain Dumas, who has set record times at the Nürburgring, Pikes Peak and Goodwood hillclimb using Volkswagen's retired ID R electric racing prototype.

The Supervan 4 is a showpiece for the newly hived-off Ford Pro commercial vehicle division, but the engineering work is all courtesy of Ford Performance and Austrian electrified rallying outfit Stard. 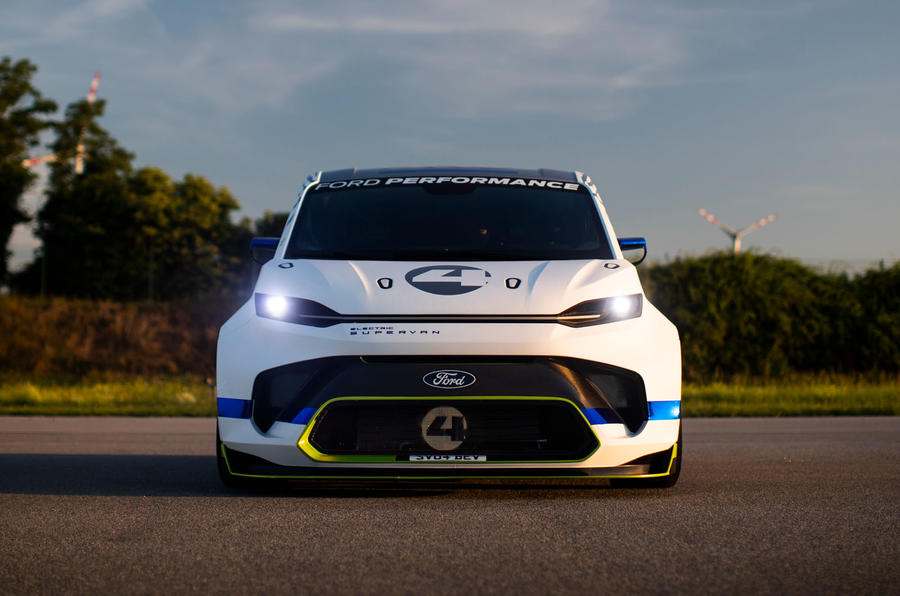 The standard E-Transit Custom floorpan is topped by a steel spaceframe and a radical aero-optimised body fabricated with lightweight composite panels, while the suspension, brakes and steering are all track-honed systems.

Motorsport-derived features include a massive front splitter, prominent side skirts and a GT3-style rear diffuser - all installed in the name of enhancing downforce - while the standard van's panel sides give way to a cutaway design that tapers towards the rear for improved airflow.

It's a similar story inside, where the E-Transit's comparatively opulent cabin makes way for a more race-friendly set-up comprising a full roll cage and FIA-approved race seats. But importantly the Supervan 4 also has a touchscreen lifted from the Ford Mustang Mach-E, which can be used, Ford says, when drivers want to "take a break from hustling the electric Supervan up hillclimbs and around racetracks to plot a route, find a charger, connect to wifi and make phone calls".

The company highlights that the connectivity offered by the Sync infotainment system "keeps the driver informed and enables real-time data transmission for remote vehicle management and optimised performance, just like the integrated services that can accelerate the productivity of over 125,000 Ford Pro customers across Europe."

In another nod to everyday usability, the Supervan also offers a conventional rear load bay, even having a door at the side for easy loading, and the regenerative braking can be set to three different levels of severity, just like on the standard Ford E-Transit. 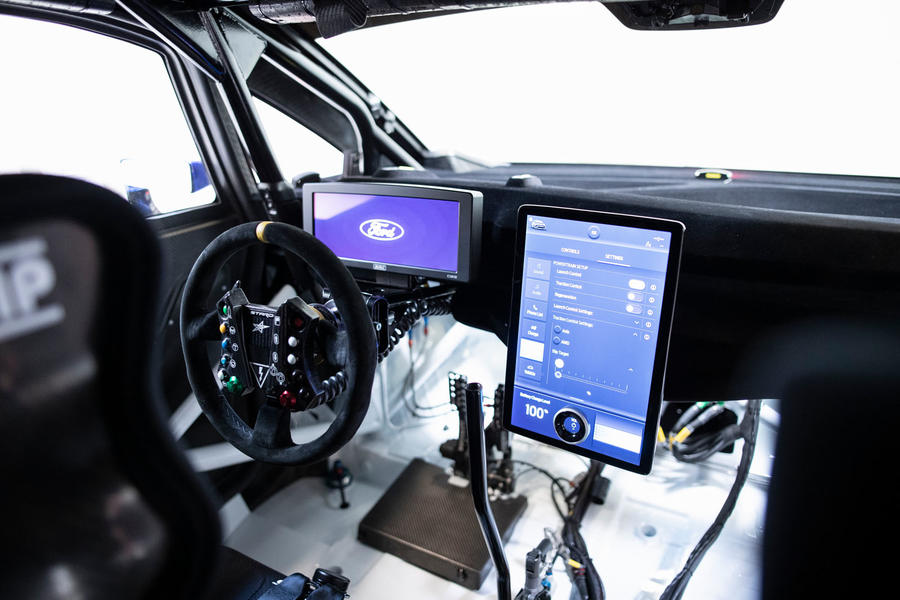