Bohema mounts its 3.8-litre V6 in the middle and its tub and bodywork are carbonfibre From the maker of the R1 racer, the Ł1.32 million Bohema weighs 987kg and shares Nissan GT-R's V6

An extraordinary, trackday-optimised hypercar from Czech maker Praga is currently in the final stages of development and will launch next year.

The mid-engined, carbon-tubbed and carbon-bodied Bohema will mark the 115-year-old, multi-disciplinary firm's first proper foray into road cars since 1947 and is heavily influenced by the flyweight Praga R1 racer that, having recently proved too competitive for even the full-blown GT3 cars of Britcar Endurance Championship, now enjoys its own one-make series.

Prices will start at Ł1.32 million in the UK, which is where Praga Cars is likely to base its commercial activities.

Beyond their insectoid and highly sculptural aesthetics, the Bohema and the R1 will share almost nothing, the road-legal model being new from the ground up. This was essential in order to give the the car enough breadth of ability to be used properly on the road, and in terms of footprint the larger Bohema is similar to the current crop of supercars, being roughly the same width and length as a Ferrari 296 GTB. It means that while the cockpit is tight and utilitarian in its architecture, it can carry driver and passenger in reasonable comfort, though this has partly been achieved by staggering the seats. 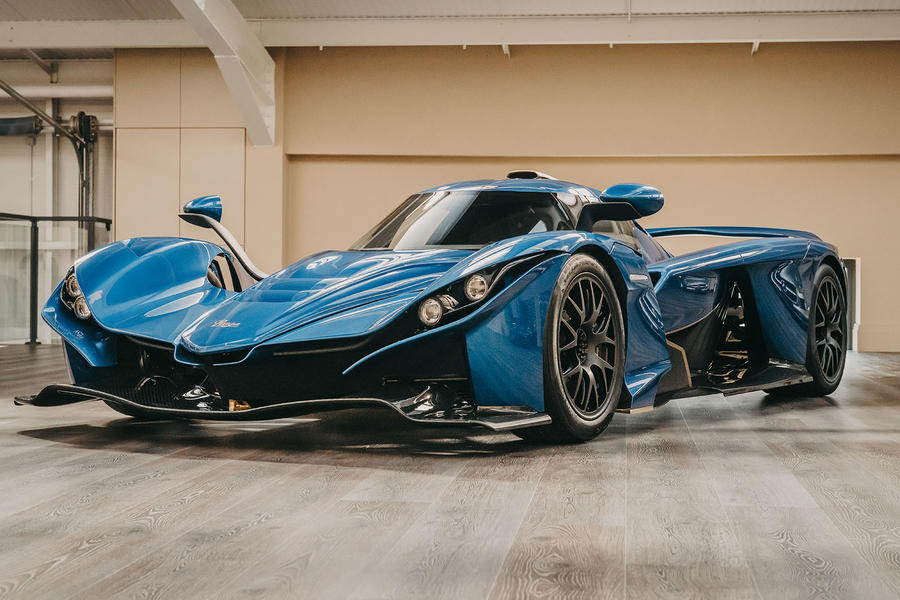 The car's cabin is also upholstered with relative lavishness and there is even 100 litres of luggage space in the car's flanks, package in similar fashion to what Pagani does with the Huyra.

Having spent two years establishing the car's track capabilities, which included use of an F1 team's wind tunnel to hone the car's aero properties, Praga's engineers are now in the final stages of ensuring the Bohema's road manners are up to scratch.

An acceptably absorbent ride and adequate insulation from road roar and engine din are important factors that Praga never had to consider with the R1, and are reasons why the rear-drive powertrain is affixed to the central structure via a chromoly subframe rather than being bolted on directly.

Work on the car's automated-clutch sequential gearbox also continues, and the compliance characteristics of the in-board pushrod suspension, which will use manually adjustable Öhlins dampers, will be the final dynamic element the team signs off.

However, matters relating to usability and comfort are very much concessions, and the Bohema's main concern is raw speed. 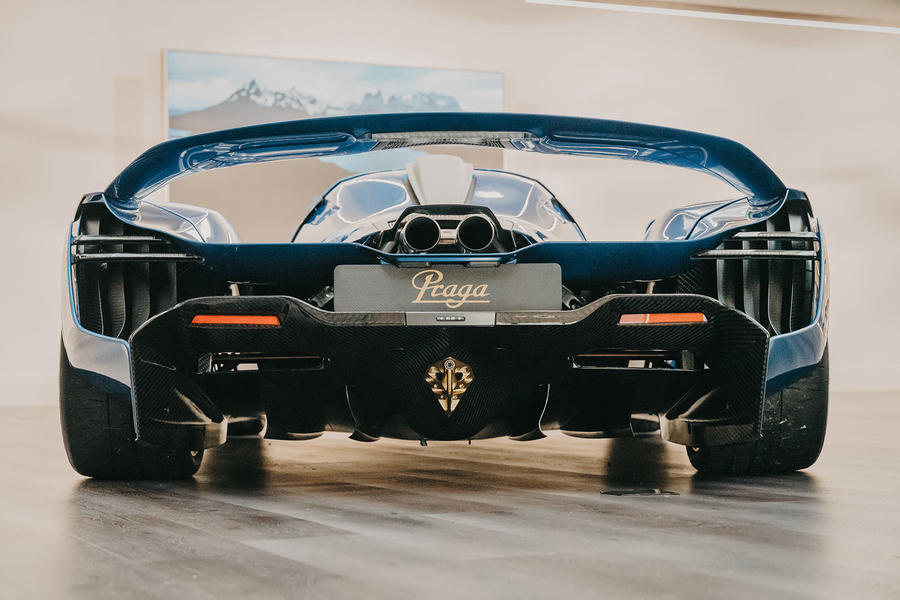 Praga is targeting a weight of 982kg at the kerb, and it's this lack of mass along with the potential for up to 900kg of downforce at 150mph that should yield jaw-dropping pace on the track.

With as much as 700bhp available, the car's power-to-weight ratio should be comfortably in excess of what even hardcore specials such as the BAC Mono R and Ariel Atom 4 can muster. That power will come from the same 3.8-litre twin-turbo V6 found in the R35-generation Nissan GT-R, only with the wet-sump lubrication system removed and replaced by a dry sump set-up of Praga's own design. As well as being better suited to the high lateral loads achieved on track, this lowers the height of the engine considerably and allows it to sit deep within the car. Note also that the Praga is purely rear-wheel drive.

Iain Litchfield, the British tuner renowned for his expertise with the GT-R, has been involved and helped establish an arrangement that will enable Nissan to support Praga during the time it uses the Japanese company's engines.

Interestingly, chief engineer Jan Martinek had the unenviable task of choosing between the Nissan unit and Audi's 5.2-litre atmospheric V10, but while the V10 would undoubtedly have sounded superb, Audi couldn't guarantee ongoing support for an engine nearing the end of its regulatory life, which was a deal-breaker for Praga. 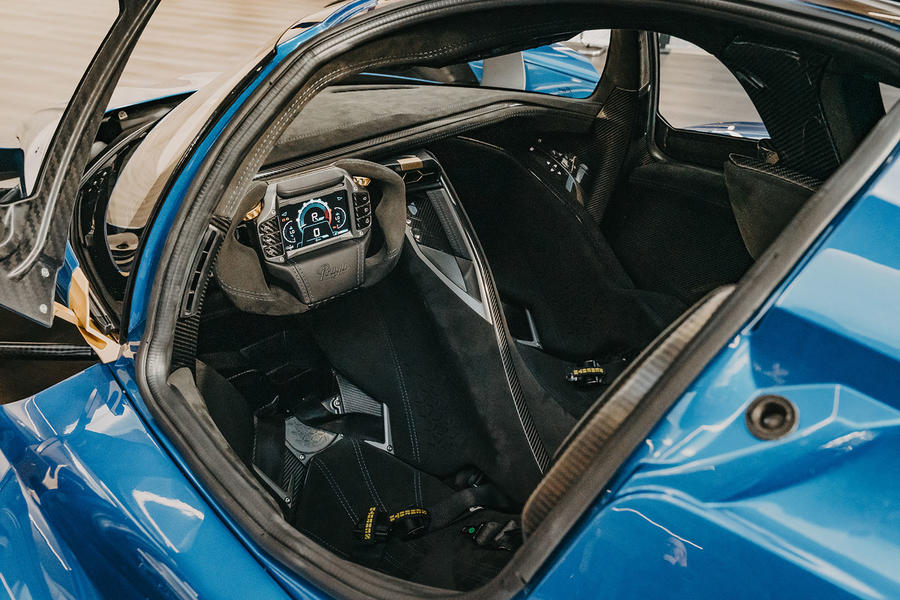 The Bohema will be hand-built at the Czech facility where the R1 is assembled, and under the direction of ex-Ford WRC driver Roman Kresta. In terms of positioning, the car should sit between the likes of the comparatively affordable Ultima RS and blow-the-budget specials such as the Aston Martin Valkyrie. 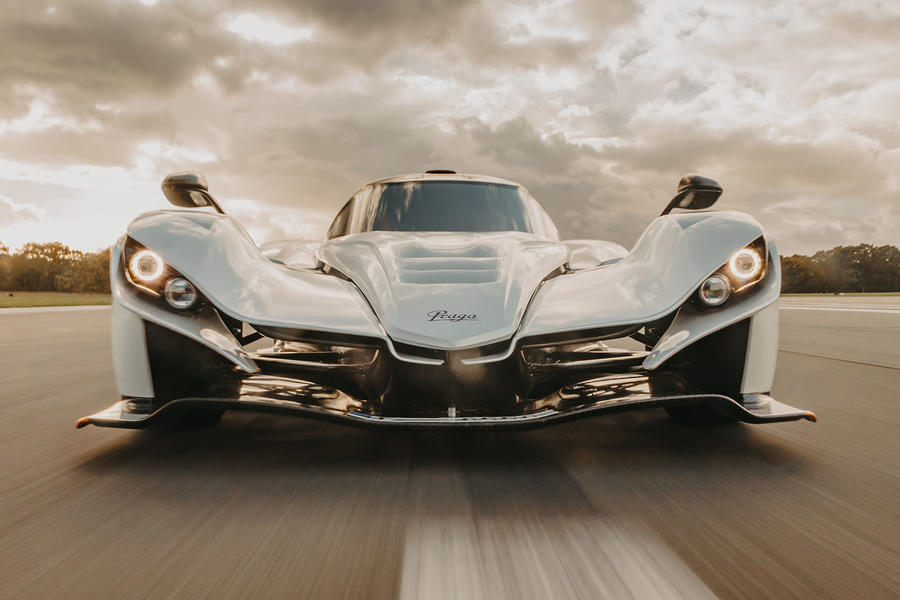 How close are chief engineer Jan Martinek and his team to achieving their ambitious aim of marrying the prototype-sports car experience with acceptable levels of on-road usability?

We'll find out fully next spring, when we drive the finished Bohema on road and track, but a short taster in a prototype at Dunsfold showed that Praga might just make the idea work. Granted, even by hardcore street car standards, ingress is challenging and involves sitting on the car's carbonfibre flanks, pivoting your legs down into the cabin and then lowering yourself into the belly of the beast.

However, once you and your passenger are embedded in those offset seats (for a narrower cockpit), operating the Bohema is intuitive enough. You ignite the V6, which is running 'only' around 500bhp today rather than anything close to the punchy 700bhp target, via a roof-mounted button. You then keep your foot on the race-car-firm brake pedal, pull the right-hand paddle for first gear, feed in some power (there's no creep function) and away you go. 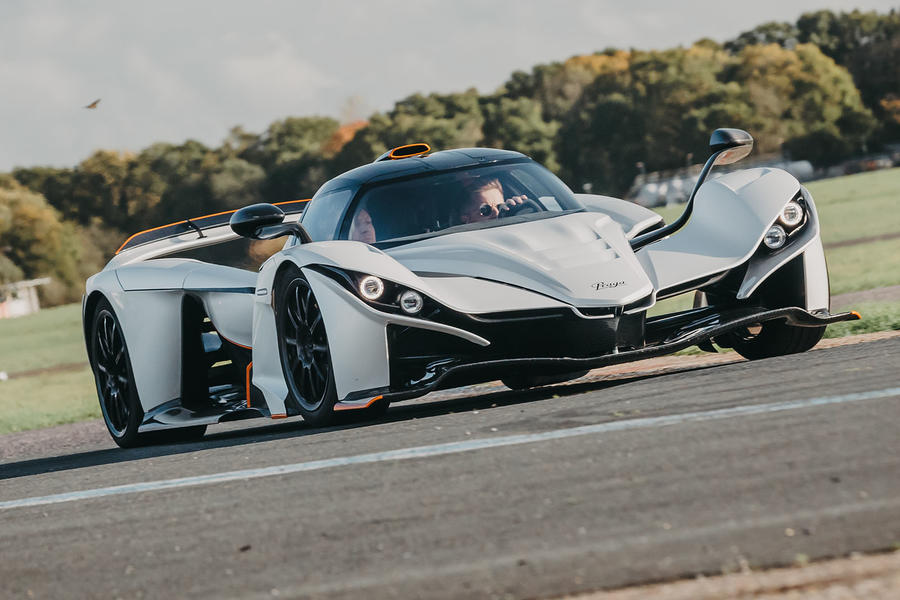 Because the gearbox engagement is automated, there's no need to mess around with easing in a knife-edge clutch, and because Nissan's VR38DETT engine is largely unchanged from what you'll get in any R35 GT-R, it pulls tractably and cleanly from idle. Mind you, second and third gear slot home with proper attitude when you're at low revs, and even lifting out of the throttle momentarily only helps so much. If Praga can mellow this process and make the smoothness of the Hewland 'box less dependent on high revs and a wide-open throttle, it'll help matters considerably.

Other things to note are that forward and side visibility is just sensational. You really do feel like you're sitting in the nose-cone of a Tornado or somesuch, and the ergonomics are excellent, too. 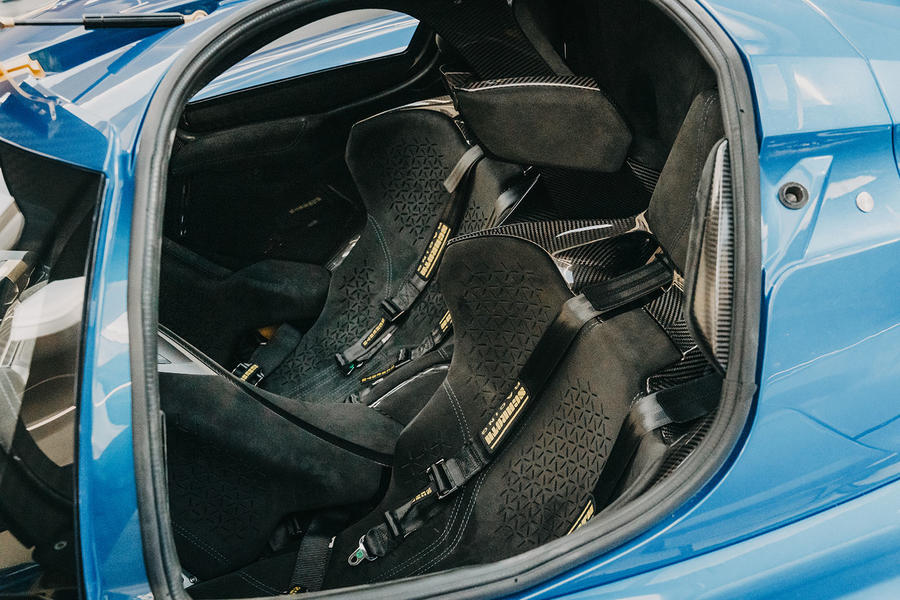 Your driving position is set by adjusting the pedal box and tilting the 'seat', which is totally integrated into the car's carbon tub, so it's not hard to find a comfortable, confidence-inspiring base of operations. Lightly power-assisted steering also makes low-speed manoeuvring easier than you might be expecting.

As for the dynamics, we don't get to push our Pirelli P Zero Trofeo R-shod prototype especially, but even at five-tenths it's an all-encompassing machine, guttural and gritty, only without much in the way of fear factor. Just how forgiving it is at the limit is something we'll find out, but Praga's stated aim is to make his car adaptable to a range of skill levels, so maybe we shouldn't expect something too spiky. 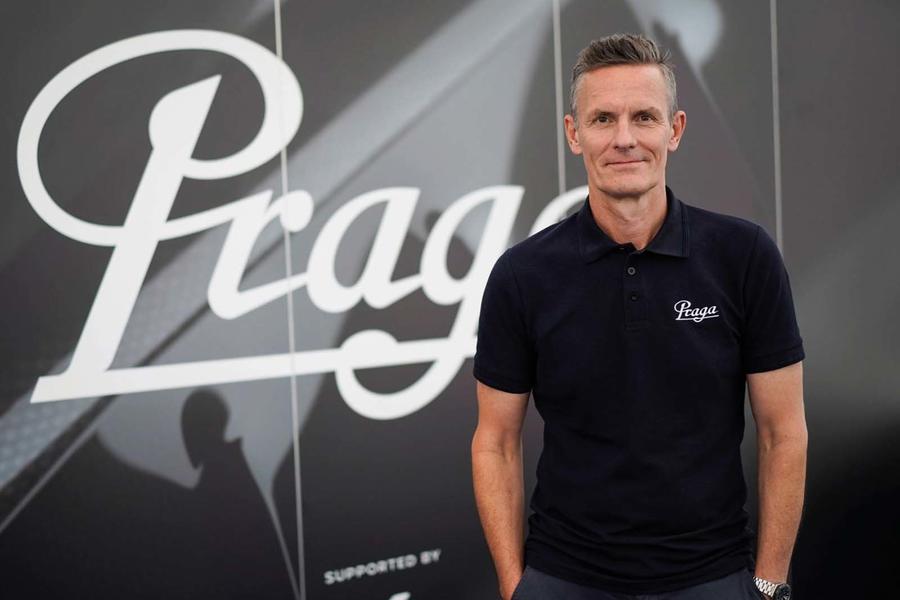 How expensive is the Bohema going to be to run?

"The running costs will be sensible, given the structure of the car, and this is a known powertrain. We're working closely with Litchfield on an aftersales programme and part of that discussion is warranty, which will be two years and, in essence, unlimited mileage. Against a lot of the hypercars that are coming out at the moment, we're keen that ours is seen as one that is predictable to run and maintain."

Is the Bohema something of a loss-leading statement project for Praga?

"It's being developed as a profitable business venture, though without a doubt, bringing a hypercar to market will stimulate interest in the race car market."

Given it'll take no shortage of skill for drivers to get the best out of the car, will any training be offered?

"Yes, we'll do track programmes with the car, and one of the discussions we're having with [brand ambassador] Romain Grosjean is how he can be involved in that. Joseph Kral, our chief test driver, would also like to be involved.

"With 1000 kilos and 700bhp, there's a level of responsibility [involved from our side], but also, the company's full of people who love motor racing, so there's just a passion to see these cars on track and help customers get the most out of them. Track time at Spa [is under consideration] - the car deserves the best tracks in the world - but it'd also be nice to set up some programmes at the Slovakia Ring, just 2km from our development facility." 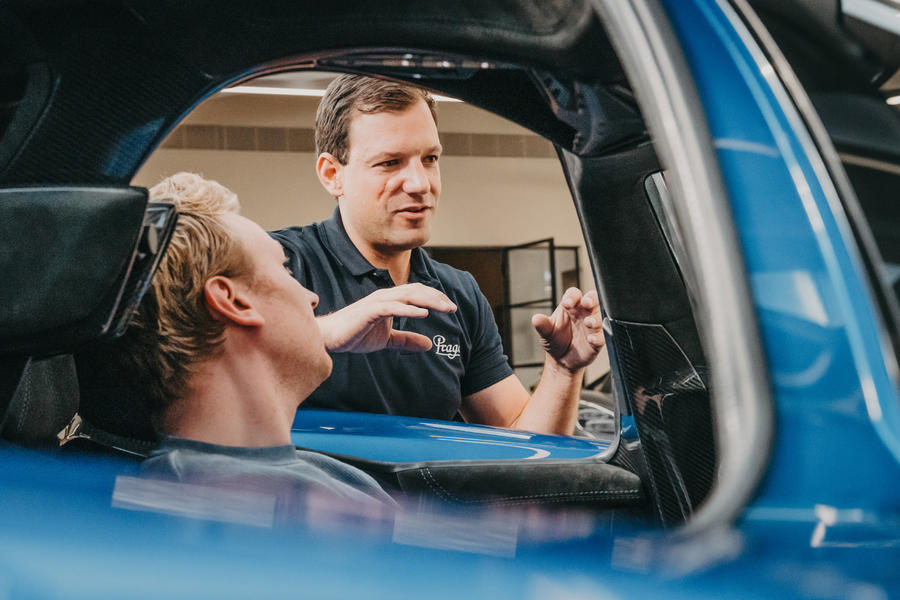 And how long is the Bohema going to be in production for?

"Four to five years, probably. We're not going to rush it, and there will be a maximum of 10 cars in 2023 because we want to make sure the quality is superb and we want to work closely with the clients. It'll be about 20 cars per year thereafter."

What's the scope for personalisation?