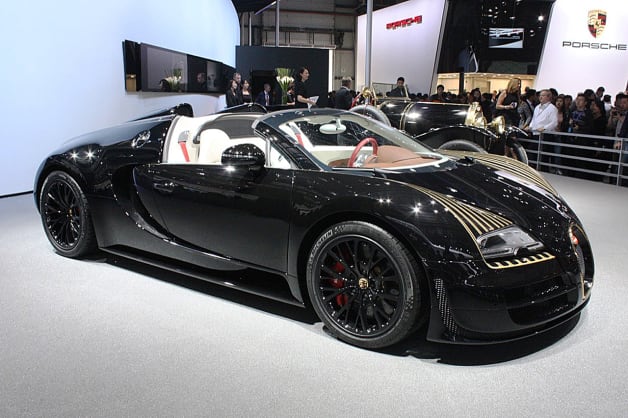 The Bugatti Veyron Legend editions may do nothing to alter the Grand Sport Vitesse's already prodigious performance, but buyers appear to love them. Four special models have been unveiled so far, and Bugatti has sold out of all of them. At the 2014 Beijing Motor Show, the automaker has introduced the fifth Legend - the Black Bess.

Unlike the previous models, this Legend is inspired by a specific car, rather than a person. Black Bess was the name of a Bugatti Type 18 owned by famous French aviator Roland Garros. With seven examples built from 1912 to 1914, the 18 was a supercar in its time. It sported a 99-horspower, 5.0-liter four-cylinder engine and could reach 100 miles per hour. While paltry today, it was amazing performance by contemporary standards.

The modern Black Bess packs the Veyron Grand Sport Vitesse's 1,184-hp, quad-turbo W16 engine, and it wears rich, black paint with 24-carat gold accents. The interior has a combination of beige, brown and red leather, but its real showpieces are the hand-painted leather door panels that depict the Type 18 and Roland Garros' plane.

Like the rest of the Legends vehicles, the Black Bess will be limited to just three cars, and each one will be priced at €2.15 million ($2.97 million). Scroll down to read the full press release on the on Bugatti's latest, classically inspired creation.