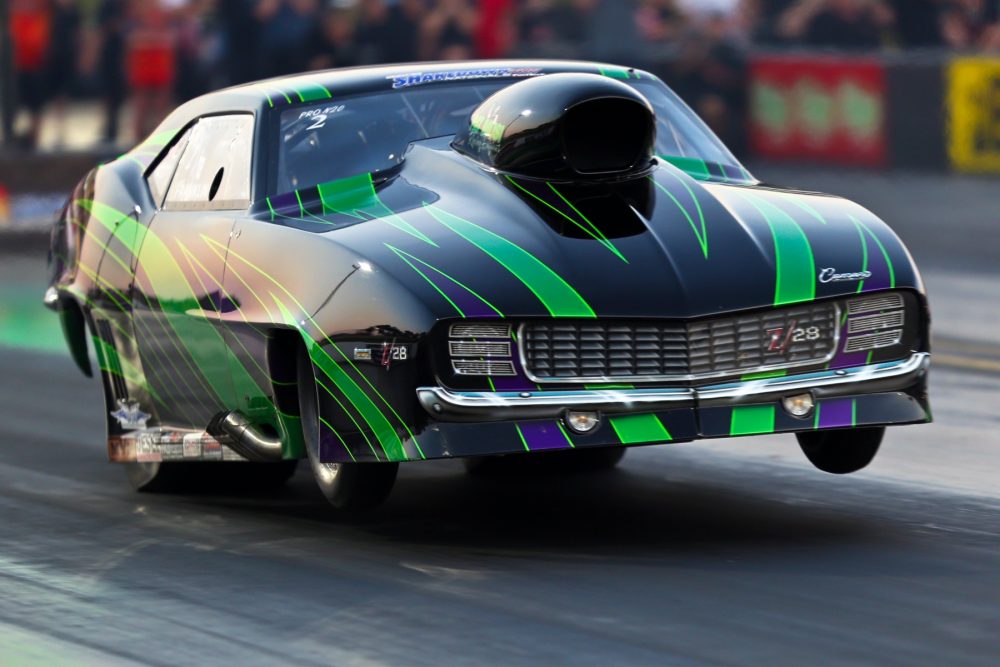 Two-time Pro Nitrous world champion Tommy Franklin dipped deep into the 3.60s with his 3.638 at 206.39 in the second qualifying session. Franklin's run in his Musi-powered "Jungle Rat" '69 Camaro put him at the top of the 16-car Pro Nitrous qualifying order that included five other racers in the 3.60-second range.

"The track prep is awesome out there," Franklin said. "Tyler [Crossnoe] and the track group are just awesome. The racetrack was taking everything we could give it. I was like, 'Well, let’s see if it will take this’ and it did. The car’s working really good right now. Hat's off to Pat Musi power, Jerry Bickel Race Cars, Ty-Drive, and everybody else that supports us. I say it all the time: our team is hustling with four cars running, but it’s good and we’re having fun."

Next to Franklin, newly crowned 2021 world champion Jim Halsey fired off a 3.653 at 208.42 to hold down the No. 2 spot with his Fulton-powered "Daddy Shark" '68 Camaro. Two-time world champion Jason Harris, who returned to Pro Nitrous this summer after almost two seasons in Pro Boost, qualified No. 3 with a 3.681 at 204.66 in his Albert-powered "Party Time" '69 Camaro. 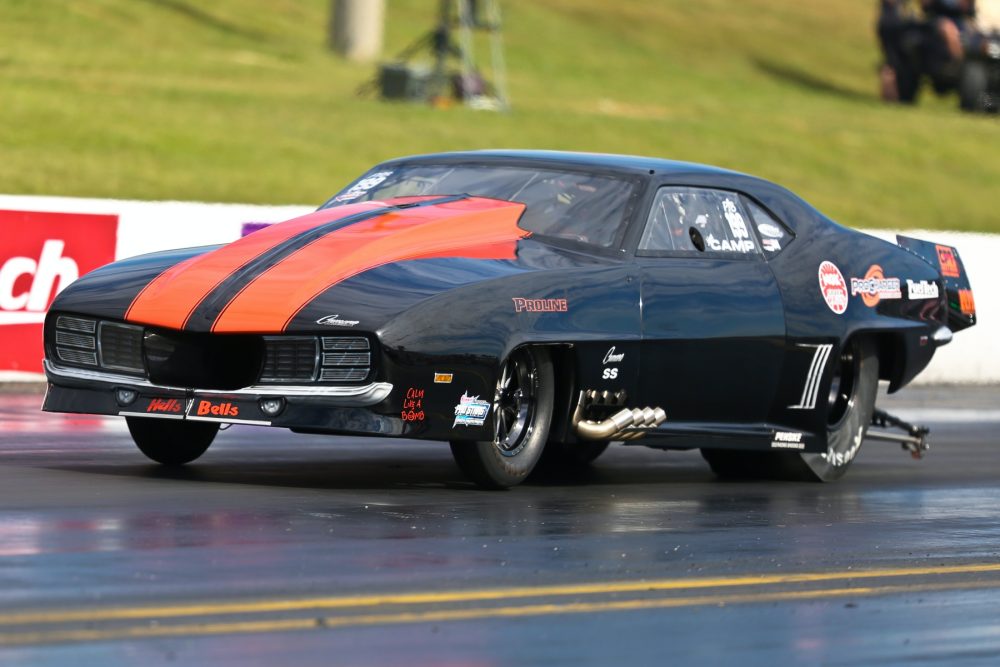 For the second consecutive race, Johnny Camp and his ProCharger-boosted "Hells Bells" '69 Camaro ended Friday qualifying in the No. 1 spot. The former Pro Nitrous driver posted a 3.644 at 206.32 in the second session to take the No. 1 spot from Daniel Pharris by just two thousandths of a second. With forecasted rain threatening Saturday's night qualifying session, Camp and tuner Brandon Stroud wanted to make the most of the Friday evening run.

"The team’s working hard," said Camp, who thanked supporters NGK Spark Plugs, Tatman Electric and Proline Racing. "We don’t know about this weather coming in, so we wanted to stay ahead of the game and make the best possible pass. I think it was important to make a good run this evening. It could be the last chance to put a big number up [in qualifying]. We were hoping to go a little bit quicker, but the car went out and rattled. We stayed No. 1 by a hair. There’s a lot of fast cars here." 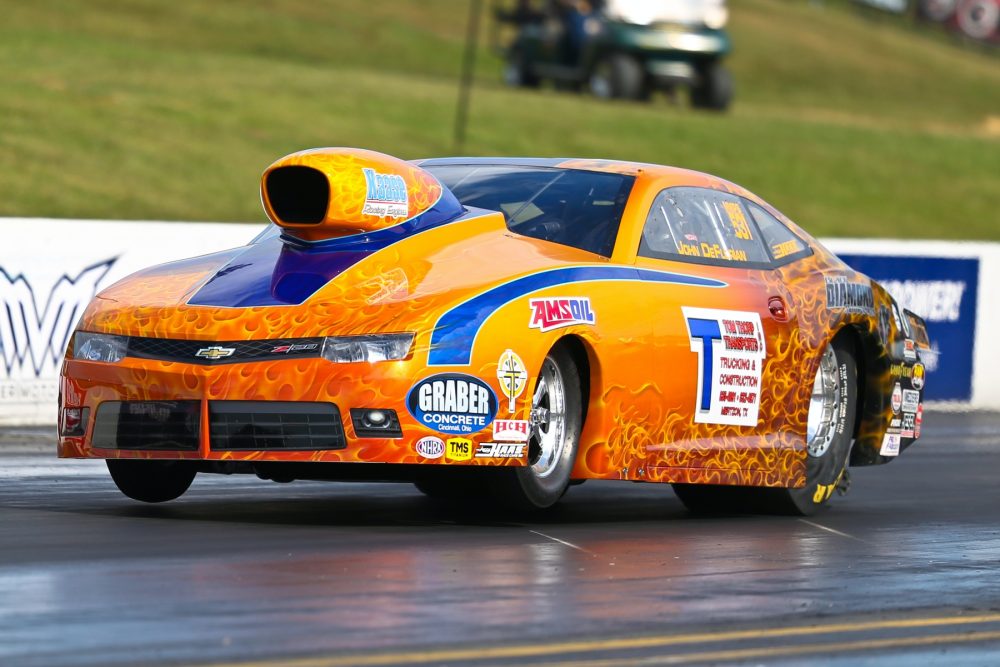 Longtime Mountain Motor Pro Stock driver John DeFlorian is making just his third PDRA Extreme Pro Stock appearance of the season, but he's making the most of it after driving his Kaase-powered Graber Concrete '15 Camaro to a 4.047 at 178.35, the quickest pass on Friday. The Jerry Haas Race Cars shop foreman hopes to hang on to the top spot through Saturday's two sessions as well.

"This was a good start to our weekend," said DeFlorian, who thanked sponsor Jeff Graber, wife Liann, daughter Ashley, crew chief Brian “Lump” Self, Kevin and Karen Bealko, and longtime supporters like Amsoil. "We have three goals we’re trying to accomplish this weekend. This is the beginning of the goals. We accomplished what we set out for so far. We wanted to be able to make a couple good hits and try to achieve No. 1 qualifier. That may not hold up. Tomorrow that could change. But we’re going to try tomorrow just as hard as we tried today."

Reigning world champion Johnny Pluchino made the second-best run of the day in his Kaase-powered Strutmasters '13 Mustang, a 4.078 at 177.07. Elijah Morton rounds out the top 3 with his 4.08 at 176.93 in his Allen-powered Morton Brothers Motorsports '19 Mustang. 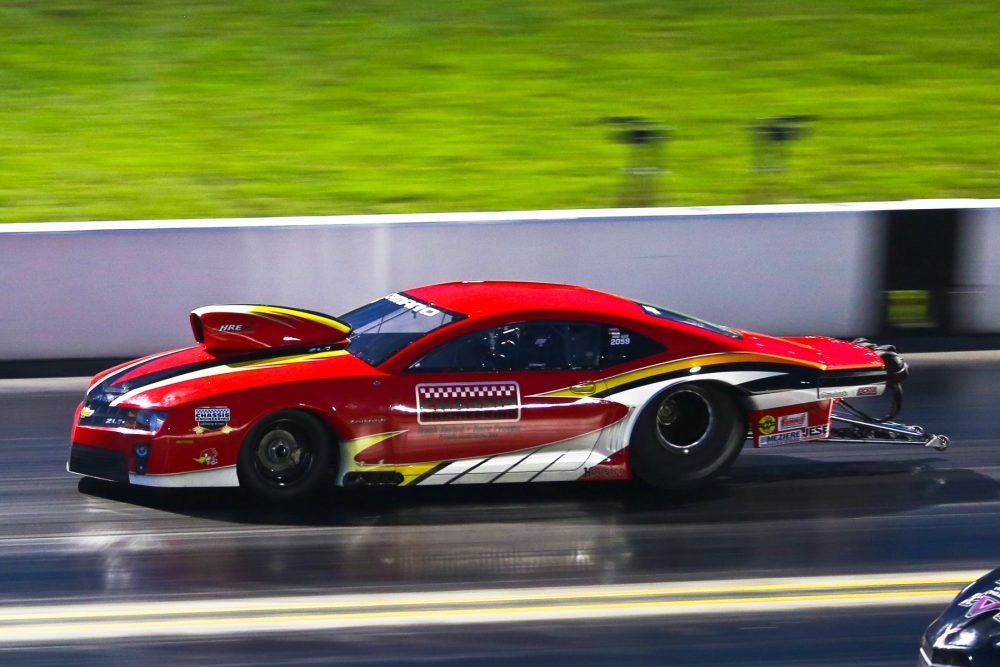 Florida's Daryl Stewart made his Pro Outlaw 632 debut this season after a 25-year hiatus from drag racing. He's won two races in his Clayton Murphy-tuned, HRE-powered Chassis Engineering '12 Camaro, but he's still chasing his first No. 1 qualifier award. He's one step closer to that achievement after recording a 4.154 at 170.36 to finish Friday as the provisional No. 1 qualifier.

"This is huge," Stewart said. "It’s exciting, especially to do it at the last race of the season. We can’t win the championship - we’re No. 2 [in points] - but if we can come out and get this [No. 1 qualifier award] and try to win the race, that’s all we can hope for this weekend. That’s what we’re shooting for."

Rookie Amber Franklin, who went to the final round in her debut at PDRA DragWars two weeks ago, is currently second with a 4.162 at 169.06 in her Musi-powered "Jungle Rat" '69 Camaro. Reigning world champion Wes Distefano, who secured the 2021 championship with his DragWars win, is third in his Musi-powered $hameless Racing '68 Camaro with a 4.182 at 171.90.

Meshal Al-Saber and tuner Brad McCoy set the tone for their weekend in Thursday testing when they ripped off a 3.955. The Kuwait rider was chasing a similar number on the Q80 Racing '18 Hayabusa in qualifying and ended up with a 3.973 at 176.49 to top the Pro Nitrous Motorcycle field for the first time.

"I’m very happy to be the No. 1 qualifier," Al-Saber said. "I come from the Middle East to race and fly 14-16 hours to race together with the fastest bikes in the world. Thanks to Brad McCoy and my friends at T.T. Jones Racing. Lots of people help me here. I am happy because we ran 3.95 last night and 3.97 today. This is the first time I’ve been No. 1. I am very happy for me and my team and sponsors in Kuwait." 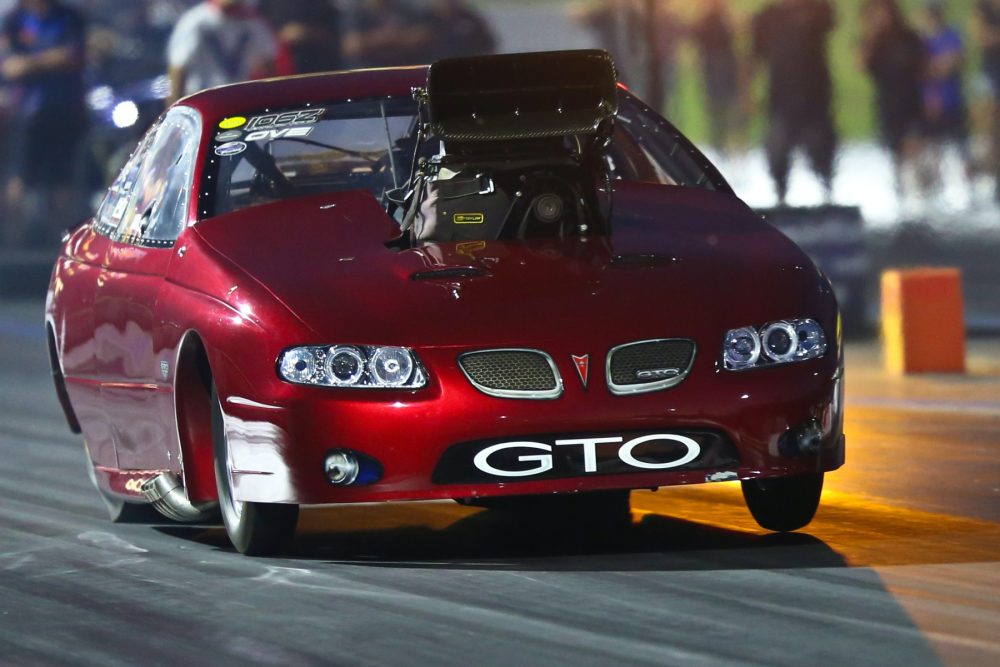 A month ago, "Quick" Nick Schroeder dipped into the 3-second range to reach the Pro Street final round at the Shakedown Nationals at Virginia Motorsports Park. The Delaware racer found his way back into the 3.90s in the second qualifying session at the World Finals, firing off a 3.997 at 192.11 in his screw-blown '06 GTO to take the provisional No. 1 spot.

"We showed up here and tried to run basically the same thing right off the trailer and it wouldn’t take it," Schroeder said. "That makes you scratch your head. But it feels pretty good because we're chasing [points leader] Tim Essick, who’s been kicking everybody’s ass all year. We’re trying to run with him. It feels good to qualify No. 1 for now and to run right beside him and take it from him."

Reigning world champion Buddy Perkinson used a record 3.729 at 203.68 to take the provisional No. 1 spot in Elite Top Sportsman. He'll have to back up the performance in his Musi-powered LAT Racing Oils '69 Camaro during the weekend to claim the new E.T. record. John Benoit is second in his Buck-powered '17 Camaro with a 3.765 at 203.95, while Chris "Nitrous" Nyerges rounds out the top 3 with a 3.821 at 197.45 in the Buck-powered Schween Motorsports '20 Corvette.

Past world champion Kellan Farmer reached the top of the Elite Top Dragster qualifying order for the first time, recording a 3.803 at 190.81 in his Race Tech Race Cars dragster. Points leader Michael White follows closely with a 3.815 at 191.02 in his ProCharged, '57 Chevy-themed dragster. Joshua Vanskiver is third in his '19 Spitzer entry with a 3.832 at 193.77.

Driving Tommy Franklin's Musi-powered dragster, Blake Denton is the provisional No. 1 qualifier in Top Dragster 32 with a 4.241 at 164.81.

Qualifying at the Brian Olson Memorial World Finals presented by ProCharger will continue Saturday, beginning with Top Jr. Dragster at 10 a.m. Pro qualifying sessions will run at 1:30 and 3:15 p.m.