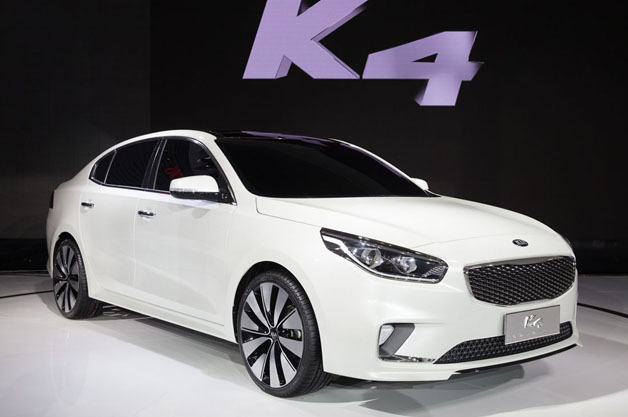 Among the dozens of foreign automakers eager to showcase their wares to the Chinese market, Kia arrived at the Beijing Motor Show with the new K4. Though technically categorized as a "concept," the K4 previews a sedan which Kia intends to launch in China later this year.

The K4 is a midsize sedan measuring 186 inches long and riding on a 106-inch wheelbase that makes it bigger than the Forte (sold in the Far East as the K3) and just a few inches shorter than the Optima (aka K5). The form is draped in familiar Kia-style bodywork, with a high trunk and low nose to give it a wedge shape and a familiar if somewhat new take on the headlights and grille seen on other new models from the Korean automaker.

Power comes from a 1.6-liter turbo four (smaller than the engines available in the Optima/K5) mated to a seven-speed DCT. Kia has also fitted the K4 concept with push-button ignition, UVO infotainment system, rear-view camera, six airbags and stability management. In short, everything you'd expect from the latest product of a global automaker.

Unfortunately Kia hasn't released much more information than that (or more than two photos, for that matter), but the K4 isn't a product destined for our shores anyway.