BMW has announced it will race its M Hybrid V8 hypercar in the FIA World Endurance Championship in 2024, following its entry into the US-based IMSA Sportscar Championship next year.

The WEC includes the Le Mans 24 Hours, so 2024 will be the first time that BMW has made an appearance at the iconic event since 1999, when it was victorious with the V12 LMR.

"The decision to run the BMW M Hybrid V8 in the IMSA series from 2023 and the WEC from 2024 is a milestone for the project," said BMW M CEo Frank van Meel.

"I sampled and marvelled at the extraordinary flair of the 24 Hours of Le Mans during my first term as CEO of BMW M, so I'm very excited to be challengig for overall victory as BMW M Motorsport again at this classic and in the whole WEC for the first time for decades.

"The BMW M Hybrid V8 represents a turning point towards electrification for BMW M. The IMSA series in North America and the WEC, which takes place all over the world, are the perfect platforms on which to use our prototype to show how exciting electrified BMW M cars will be in the future."

Speaking to Autocar's 50 Years of BMW M Podcast, Andreas Roos, Head of BMW M Motorsport said one of the main factors in entering the championships was budget, adding: "The regulations have really changed [from LMP1 times] and you can, for a decent budget, be back in the WEC. These cost-efficient regulations, combined with the hybrid technology [and goal to move to full-electtric racing] is perfect for us.

"This helps us to support our road cars and this is what we are aiming for."

Designed according to the new Le Mans Daytona Hybrid (LMDh) regulations, the BMW M Hybrid V8 is one of a number of all-new electrified endurance racers from mainstream manufacturers due to hit the track in the coming years.

It was shown off for the first time at Goodwood's Festival of Speed as part of BMW's central feature, with a new livery being revealed today.

Acura, BMW, Cadillac and Porsche will each enter LMDh cars into IMSA's new GTP category in 2023, joined by Alpine and Lamborghini the following year.

Audi was due to join sibling brand Porsche in the series from next year but has put its plans on ice.

The GTP category will also include entrants built to the Le Mans Hypercar (LMH) rules, so the Toyota GR010 Hybrid and new Peugeot 9X8 should take to the grid alongside the LMDh cars at the 24 Hours of Daytona in January for the first race of the 2023 season. 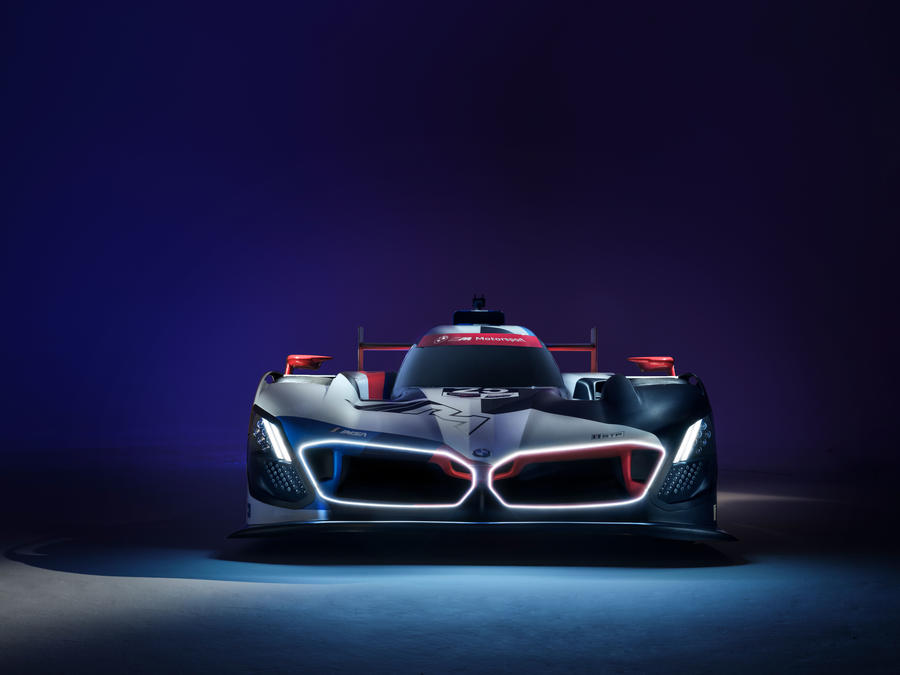 All LMDh cars use a spec hybrid system comprising a 49bhp electric motor integrated into an Xtrac gearbox and powered by batteries from Williams Advanced Engineering. A turbocharged V8 engine of undisclosed capacity will take BMW's racer up to the maximum 670bhp combined output permitted by the regulations.

Of the four nominated chassis suppliers, BMW - like Cadillac - has opted to go with Italian manufacturer Dallara, while Porsche will use Multimatic-supplied underpinnings and Acura has partnered with France's Oreca.

Manufacturers have free reign over the design of their cars, however, and BMW has opted for a look which nods heavily to both its current road cars and celebrates the 50th anniversary of its performance division.

"The prototype is clearly recognisable as a BMW M car", said the firm, highlighting the oversized kidney grilles on the front end - which channel air to the mid-mounted V8 - as well as the 'hook'-style wing mirrors, distinctive rear light designs and even a side graphic which mimics the firm's trademark Hofmeister kink. 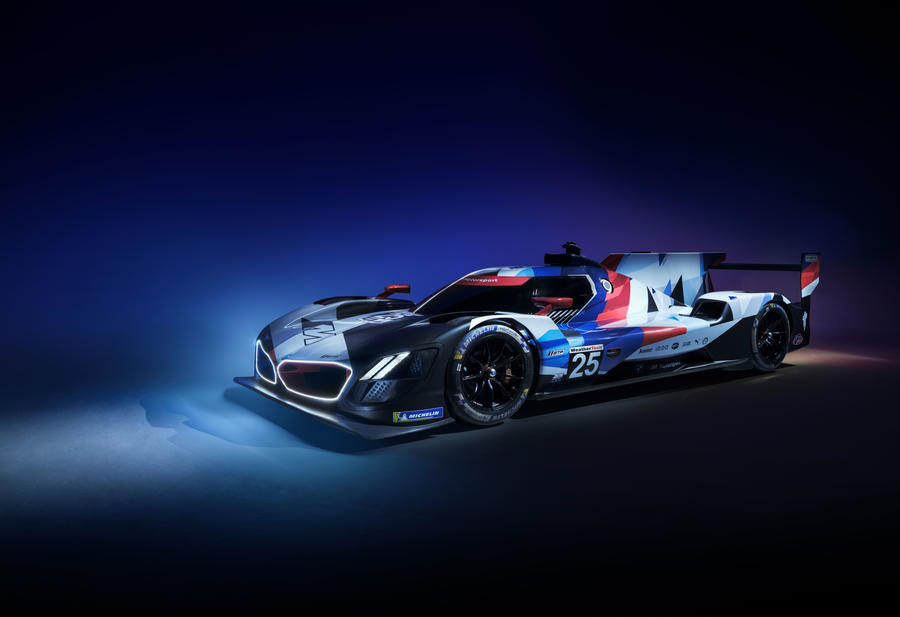 Michael Scully, global automotive director of BMW Group Designworks, said: "My team's job was to make the BMW M Hybrid V8 look like a BMW, and embrace every opportunity to make it also perform like one on the race track.

The racer arrives as BMW prepares to launch the first-ever hybridised M car, the 740bhp XM SUV, later this year. Only the division's second bespoke product after the M1 supercar, the XM pairs a mighty 4.4-litre twin-turbocharged petrol V8 with a gearbox-integrated EV motor for the highest power output of any BMW road car to date.