The Ford Ranger, the best-selling pick-up truck in the UK, has been reinvented for its fourth generation with new powertrains, a bold redesign and a revamped cabin.

The Ranger has been on sale in its current form since 2011 yet remains hugely popular. With 13,097 units sold in 2020, it was the fifth most popular light commercial vehicle in the UK and the only pick-up in the top 10. Order books for the new version will be opened in late 2022, with pricing to be confirmed closer to that time.

The new-look Ranger has been styled with nods to Ford's American-market F-150 large pick-up and new Bronco SUV. It's 50mm wider, giving it a broader stance, which is enhanced by a larger radiator grille with a horizontal bar that incorporates the Ford badge and extends across the front to the new "C-clamp" daytime running lights.

The new tailgate design features the Ranger name stamped into the metal, while the sides now have slightly more pronounced wheel arches and now feature an integrated step on either side of the rear bumper to improve access into the loadbed. LED lights are available for the first time at both ends.

The current 2.0-litre diesel engine is retained, remaining architecturally the same with only slight modifications for cooling. There will be two single-turbocharged variants and a twin-turbocharged one, the power ratings for which are still to be confirmed.

A new 3.0-litre diesel V6 has been added to the ranks, too, and while it has yet to be officially detailed, it will no doubt tout performance statistics to trump the 210bhp and 367lb ft of torque currently available in today's most powerful Ranger. A turbocharged 2.3-litre four-cylinder petrol engine will also be sold in some markets.

Ford has also confirmed that the new Ranger will be available with an electrified drivetrain, although it has offered no further details on specification or timeframe. The company will make its European commercial vehicle line-up zero-emissions-capable by 2024, so a plug-in hybrid is the most likely format for the Ranger, and various reports suggest it will be based around the 2.3-litre Ecoboost engine. 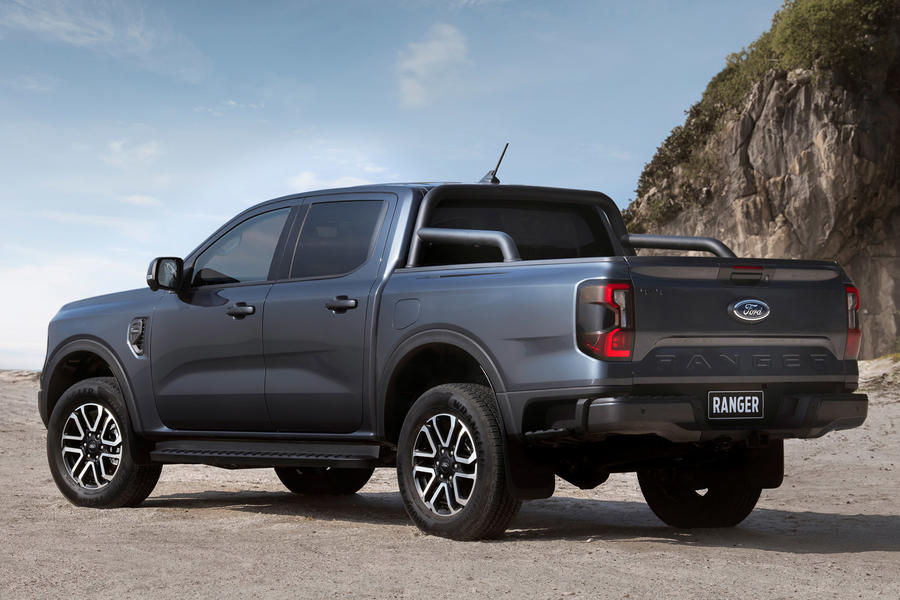 The gearshift itself is now a short-throw "e-shifter" with an electronic parking brake that will enable the Ranger to gain more driver assistance systems and semi-autonomous driving features in the future.

A choice of body types and trim levels mirroring the current range will be available, including the Ranger Raptor performance variant and plusher models (such as the popular Wildtrak) with premium soft-touch materials inside and a 10.0in or 12.0in portrait-orientated touchscreen with the latest version of Ford's Sync4 infotainment system.

A fully digital instrument cluster allows drivers to customise the information shown in front of them and adapts its display to suit the six new driving modes (previously only available in the Raptor). However, many of the off-roading controls are now found in the touchscreen, and there's a dedicated screen view for off-roading that includes data on the driveline, steering angle, vehicle pitch and roll angles alongside other useful information and controls. 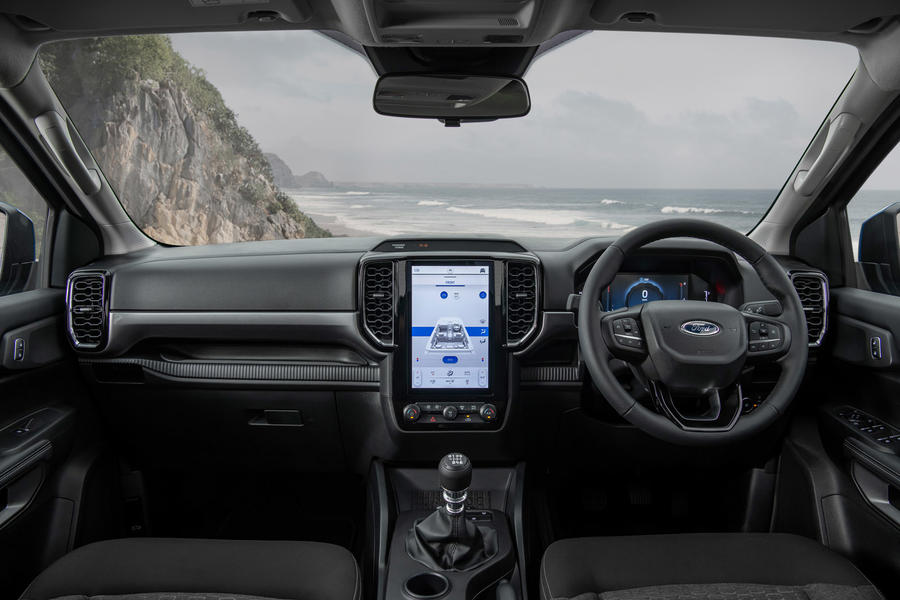 New exterior zone lighting covering the loadbed and surrounding area will improve the working use of the new pick-up, along with an onboard inverter in the rear with 400W of power.

Additional new features for the loadbed include clamps built into the tailgate to give you a mobile workbench for holding materials for cutting. New plastic capping on the loadbed edges will prevent damage to the body and conceals structural anchoring points for the easy attachment of canopies or covers.Moulded slots in the loadbed now also allow you to fit dividers to customise the load box.

In addition, Ford will offer around 600 official accessories from launch.

You've increased the Ranger's wheelbase and widened it. How will that impact its performance?

"We started with giving the Ranger a wider track width and [50mm-] longer wheelbase. We brought the front wheels closer to the front of the vehicle, which improves your approach angle, and increased the axle articulation, which allows the Ranger to behave more car-like on the road and more capable off-road. We've moved the rear dampers further outboard, which allowed us to tune a more controlled on-road ride. That means customers experience a more consistently comfortable ride."

Why are you offering both selectable and all-wheel- drive 4x4 systems?

"That part-time shift-on-the-fly 4x4 system is for more traditional enthusiast off-roaders. But we're now offering an automated four-wheel drive, where it distributes the torque between the front and rear axles smartly and intelligently as the customer demands, whether towing or on grass, gravel or ice and snow. That was driven by what we recognised the customers were after."

How will the touchscreen and driving modes work for off-roading?

"You don't have to hunt for a rear differential lock or hill descent control. There's a single touch button on the console that takes you to everything you need in one place on the screen. There are details of exactly what they do to the vehicle and certain modes will engage the diff lock and certain modes will disengage, so we have that hard button to select the drive modes."