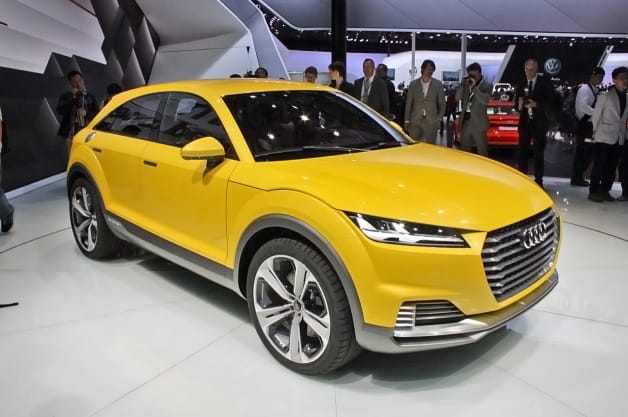 Audi took the wraps of its TT Offroad Concept at the Beijing Motor Show, after teasing us with sketches earlier this month. "The Audi TT offroad concept provides a glimpse of how we might imagine a new model in the future TT family," says Prof. Dr. Ulrich Hackenberg, Member of the Board of Management for Technical Development. "It combines the sporty genes of the TT with the strengths of a compact Audi SUV."

The latest in Audi's eTron show cars reminds us an awful lot of the the Audi Allroad Shooting Brake concept that debuted a few months ago at the Detroit Auto Show. In addition to very similar physical appearances, the two share the same plug-in hybrid propulsion systems (the "plug-in" part is a bit misleading, as the concept simply needs to be parked over an inductive pad to take advantage of Audi Wireless Charging technology).

Proving that hybrid power never has to be a compromise, the TT Offroad Concept packs a 292 horsepower turbocharged 2.0-liter four-cylinder under the hood. The combustion engine is assisted by two electric motors (rated at 40 kW at the front and 85 kW at the rear) to provide a total system output of 408 horsepower and nearly 480 pound-feet of torque. With all-wheel drive, the concept hits 60 mph in 5.2 seconds and tops out at 155 mph - while returning a provisional fuel efficiency of 123 miles per gallon equivalent.

Inside the four-place cabin is Audi's forthcoming Virtual Cockpit Technology with a customizable 12.3-inch TFT display projecting high-quality 3D graphics to the driver. Other technology includes three Audi Smart Displays, which serve as mobile infotainment systems both in and out of the car, and a cabin ionizer to remove allergens from the cabin atmosphere. And, when owners tire of driving the TT Offroad Concept, they may tool around with a 1:8-scale radio-controlled car kept in a custom storage box in the trunk.