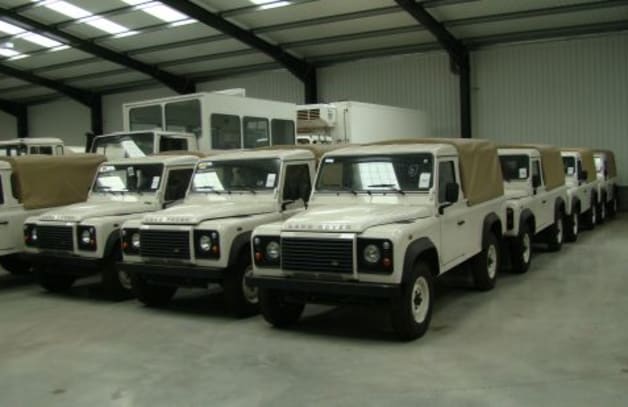 Living in the United States, Land Rover Defenders aren't exactly thick on the ground. Even if you are lucky enough to stumble on one that's worth buying, though, the price can easily exceed the cost of a new Land Rover LR4 or Range Rover Evoque, with the finest, low-mileage examples going nearly as much as a new, fullsize Range Rover.

The obvious solution, then, is to just buy your Defenders in bulk. Ex Army UK somehow acquired 43 Defender 110 Puma models from military surplus. And get this - they're new. Yes, the diesel-powered beasts of burden were bought by some government agency and put in storage. They were bought between 2008 and 2009 and look pretty much pristine. The downside, at least for our friends in the UK, where the Landies are located, is that the vehicles can't be operated within the UK or European Union. We promise, if they're sent to the US, we'll take very good care of them.

We won't even attempt to hazard a guess at how much it'll cost to acquire this small army of SUVs, but it probably won't be cheap. Still, if you're contemplating starting your very own militia, 43 rough-and-tumble (and new) military vehicles would be a solid start.

Start your private army with 43 Land Rover Defenders originally appeared on Autoblog on Mon, 21 Apr 2014 09:31:00 EST. Please see our terms for use of feeds.