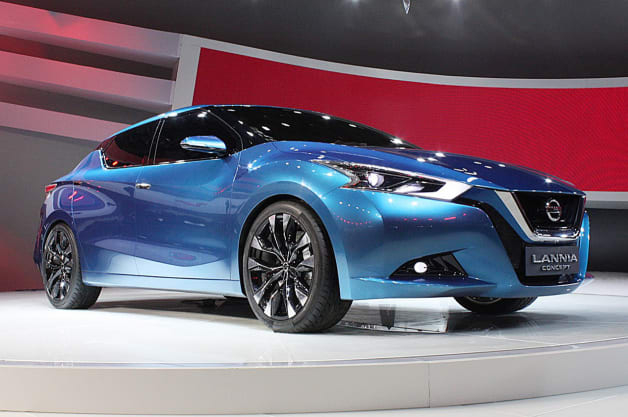 Nissan showed off a stylish new concept car to the assembled crowds of media at the Beijing Motor Show. The Lannia Concept is... well, it's not that easy to describe. It's kind of a sedan, only it looks a bit like a fastback from the rear. But for a twist, it has an ever-so-small rear deck. Regardless of how we'd classify it, it's a seriously sharp piece of styling, thanks to its unique shape and flowing character lines.

If the Lannia's styling appears familiar, it's because we've sort of seen it before. There's more than a little bit of inspiration from the Friend-Me Concept. The Lannia's overall shape is similar to the Friend-Me, while both the front and rear clips look decidedly more production ready. Considering this evolution, we shouldn't rule out a production Lannia in the next few years. And if Nissan's product boss, Andy Palmer is any indication, the new model might not be limited to China.

"It was designed by Chinese, built by Chinese for the Chinese people, and ultimately, for the world," Palmer said in a statement. If Nissan can keep this sharp styling, this could prove a compelling buy in a number of markets.

Nissan doesn't provide a great deal of additional information on this new concept. Rather than tell us about its engine, transmission or interior, the Japanese manufacturer simply said the Lannia is a "sedan theory-breaker," whatever that means. It's targeted, meanwhile, at Chinese "post-80s" trendsetters, which we take to mean either very hip nonagenarians or trendy people born after the 1980s (it's probably the latter).

Take a look above for our gallery of live images from Beijing, and then scroll down for the full round of assets from Nissan on the all-new Lannia Concept.

Chinese-designed Nissan Lannia Concept debuts in Beijing originally appeared on Autoblog on Mon, 21 Apr 2014 11:27:00 EST. Please see our terms for use of feeds.