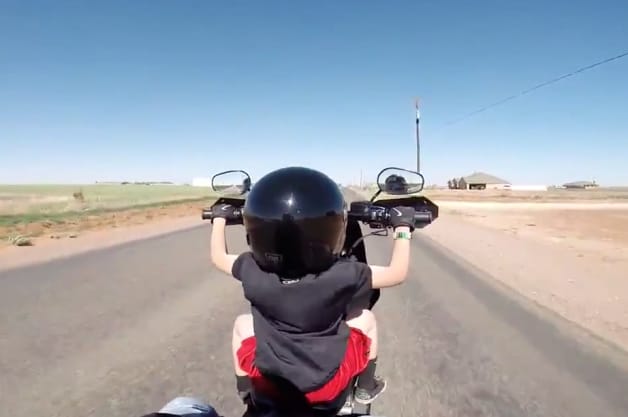 Did your parents ever let you do something as a kid, and you later realized how dangerous it was? Well, depending on your outlook, the adult in this video is either the coolest guy ever or the most reckless. While on a motorcycle ride, he taps the young boy in front of him on the helmet and hands over complete control.

Unfortunately, we have no context for this video. The YouTube description just says, "6-Year-Old Boy Riding Father's Harley On An Open Road!" So it's difficult to say where this is happening or when. Regardless, it's almost certainly against the law to let a child ride a motorcycle on public roads.

To their credit, both of them handle things quite well. On the adult's side, they don't appear to pass any traffic during the video, and he waits for a long, straight piece of road for the kid to take over. The little boy is pretty cool too. He nonchalantly grabs the handlebars after two prompts from the man and gives the throttle a good twist. He doesn't seem afraid by any of this.

Is this a cool chance for the kid or an adult putting them both at risk? Scroll down to check out the video and have your say in the poll below.