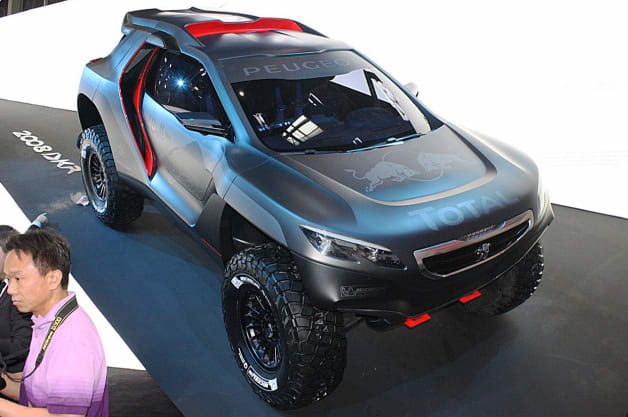 Peugeot is no stranger to dirt-oriented motorsports, but with the 2008 DKR, the French automaker is striking out in a different direction than the rally stages of Europe. Instead, it has placed aim squarely on the notorious Dakar Rally, arguably one of the most grueling, demanding and dangerous (and longest) races on the planet.

The race has been dominated the past few years by the X-Raid team and its wildly modified Mini Countryman rally cars. Peugeot is aiming to change that, teaming with Red Bull (arch-rival of X-Raid's main sponsor, Monster Energy) and parking two-time World Rally champion Carlos Sainz in the driver's seat.

Like the Countryman, the 2008 has very, very little in common with its road-going cousin. For one, it's rear-wheel drive, unlike the production, front-drive 2008 (and the four-wheel-drive Countryman). Peugeot's reasoning, as we explained on our original post on the dune-busting racer was that larger tires could be fitted - 37-inch Michelins - while suspension travel could be increased substantially.

There's still no word on what sort of powerplant sits under the 2008 DKR's hood, but if the Countryman's 3.0-liter, turbodiesel six-pot is any indication, the DKR will likely be an oil burner.

Take a look up top for our full batch of images from the 2008 DKR's debut at the Beijing Motor Show, and then scroll down for the official press release, video and images from Peugeot.