The unique Competition Eliminator category offers all-out racing featuring an expansive array of race cars and engine combinations, and although some (or many) observers may find the structure of the class a bit complicated, few could deny that it’s just downright fun to watch these faithful racers “run whatchu brung.”

[Editor’s Note: This story originally appeared in DI #177, the Sportsman Issue, in July/August of 2022.]

A handful of years ago, NHRA made enticing changes to the category that housed nearly 100 different class combinations, and since that time, participation has slowly begun to build. Over the past couple of seasons, Comp has continued to grow.

To find out what keeps these drivers so invested, we sat down with Frank Aragona Jr. and Bruno Massel - both three-time world champions in the category - as well as longtime Competition Eliminator devotees Jim Greenheck, Royce Freeman Jr., and Rodger Brogdon, a Texas businessman who launched an incredible campaign to enrich the class at the division level. 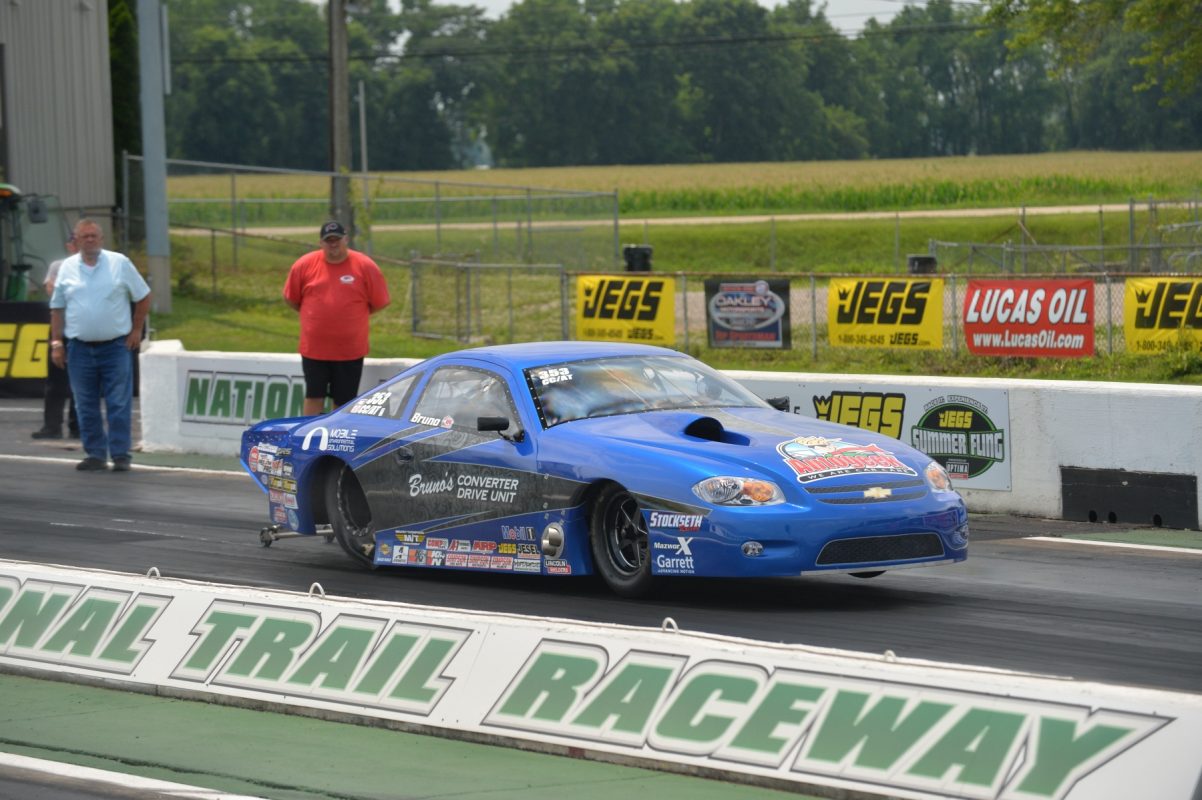 What is it about Comp Eliminator that is so appealing to you?

Aragona: We like being able to make the car go as fast as it can possibly go. And then there’s a whole chess game that goes into Comp; you have to preserve your index, save it each round, and not hit your index permanently and save it for the next race. It’s just the whole challenge of it that’s always drawn me to it. 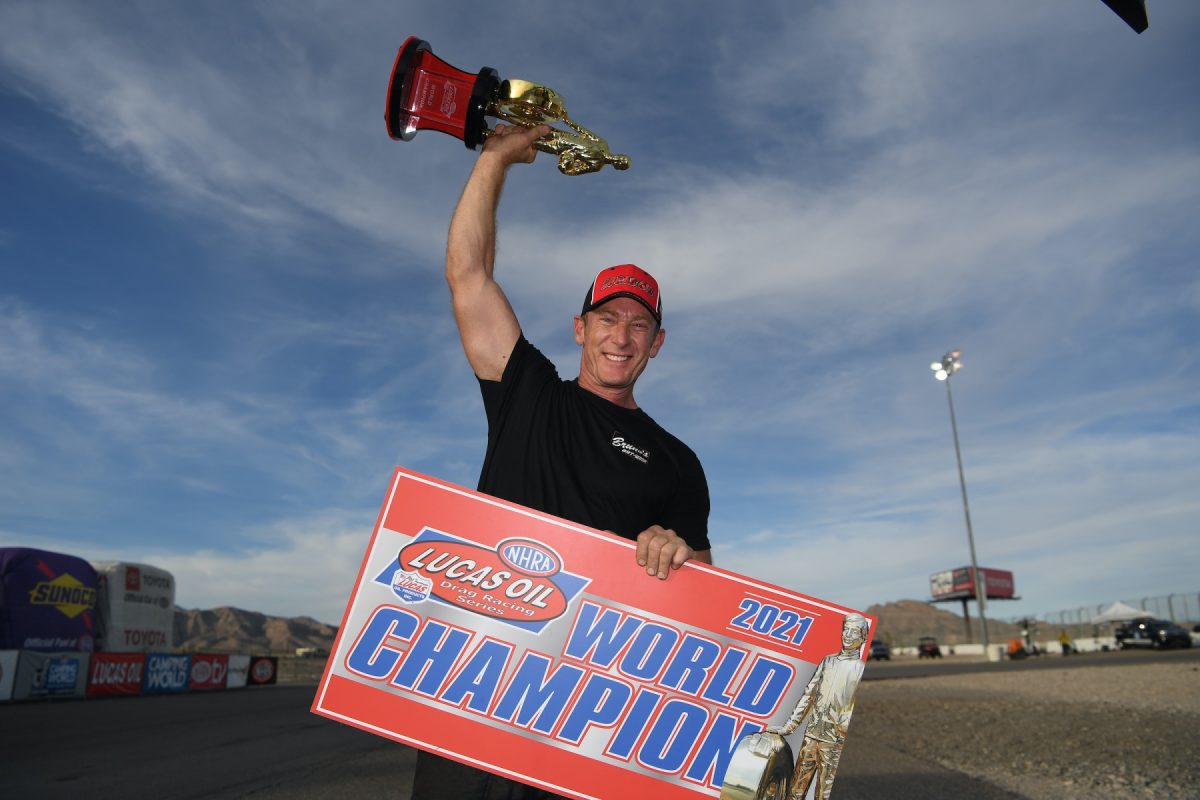 Massel: This category is challenging on so many different levels, and that’s what makes it appealing. From the performance standpoint, you want to have a fast car. From the driving standpoint, you need to be good on the tree and drive the finish line - and then it’s a chess game to preserve the index. There are just so many things that go into it that the average person doesn’t understand. You’re always toying with the car, trying to find something better. It’s not necessarily the “poor man’s Pro Stock,” but there’s part of that to it.

Greenheck: When I grew up, it was Modified Production. That went away, so that left us with Comp. I like the innovation. It all started when I was 16, when I went down the dragstrip for the first time. I fell in love.

Freeman: Comp has always been appealing, especially when you deal the way we do in a performance-based engine building program. Comp is built for the guys that maybe think outside the box a little bit and build everything one-off for that specific class. In Comp, you don’t have to worry about going too fast or having to slow down. It’s a performance-based class, and I think that’s what the draw is. You get to make your stuff as fast as you can make it.

Brogdon: For me, it’s just the creativity. Just about anything you can dream up, you can find a class to run it in with Competition Eliminator. And it fits a lot of different budgets. You can come to the class with $300-400,000, but you can be competitive with $70-80,000. It just depends which class you want to run. 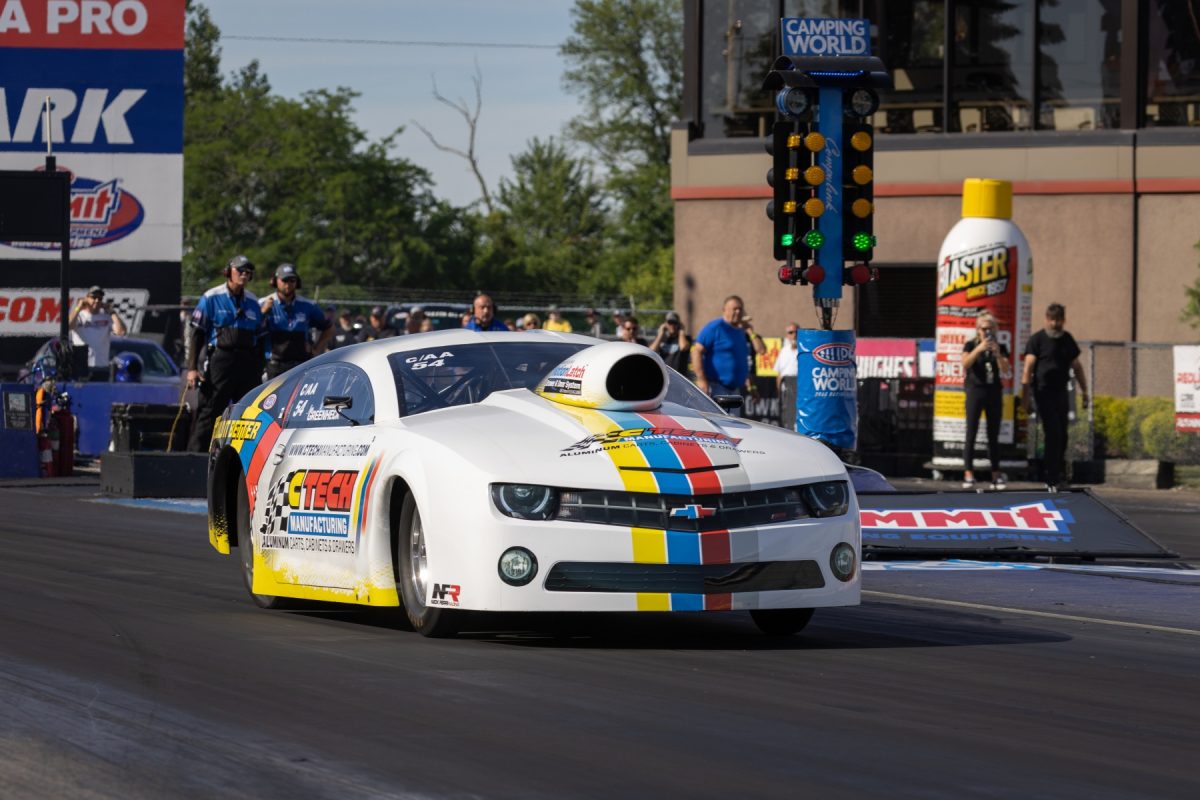 What do you find most challenging about the category?

Aragona: Most of the challenges are in getting your combination to work. Once you have the combination that works, then you have other challenges. In Competition Eliminator, there have been constant rule changes to keep participation up in the class. Some of them I haven’t agreed with, but I’ve been doing this close to 30 years - we’ve raced in every rule package there is and won in all of them. You just adapt and learn.

Massel: It’s really about preserving the index. In Norwalk, I had to shut off and give up a round I could have won because it was a match that would have caused me to destroy the index. The challenge is knowing when to shut off and live to fight another day. 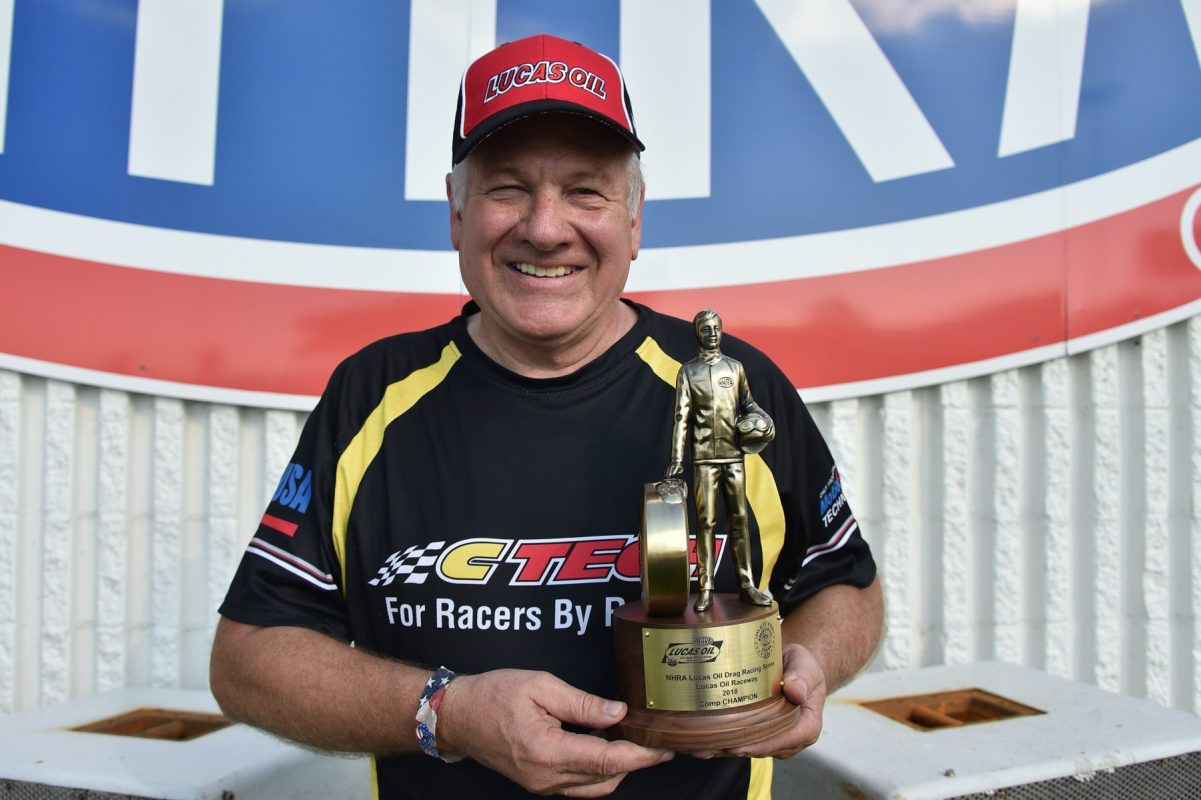 Greenheck: Everything. You have to have everything right in order to do this right. People say it’s like running Pro Stock, just with a smaller motor. It's very intricate, very finesse-y. It’s almost too finesse-y, but that's the fun of it.

Freeman: The big challenges are, as in any class, weather, racetrack, and getting your equipment right to go as fast as you can go. As you get into rounds of eliminations, you have to be careful and not take too much CIC [Competition Index Control] for the next round. It’s not only a performance-based class, but it takes some discipline behind the steering wheel - especially at the other end.

Brogdon: Just trying to stay competitive. Anyone can do all the research and find an easier class than others, but it’s still hard to stay competitive. If you want to win some rounds, or you want to win a race, you’re going to have to get indexed. The way the new program is right now, you can index yourself right out of being able to compete. Trying to find a way to win without getting your index adjusted is the challenge. 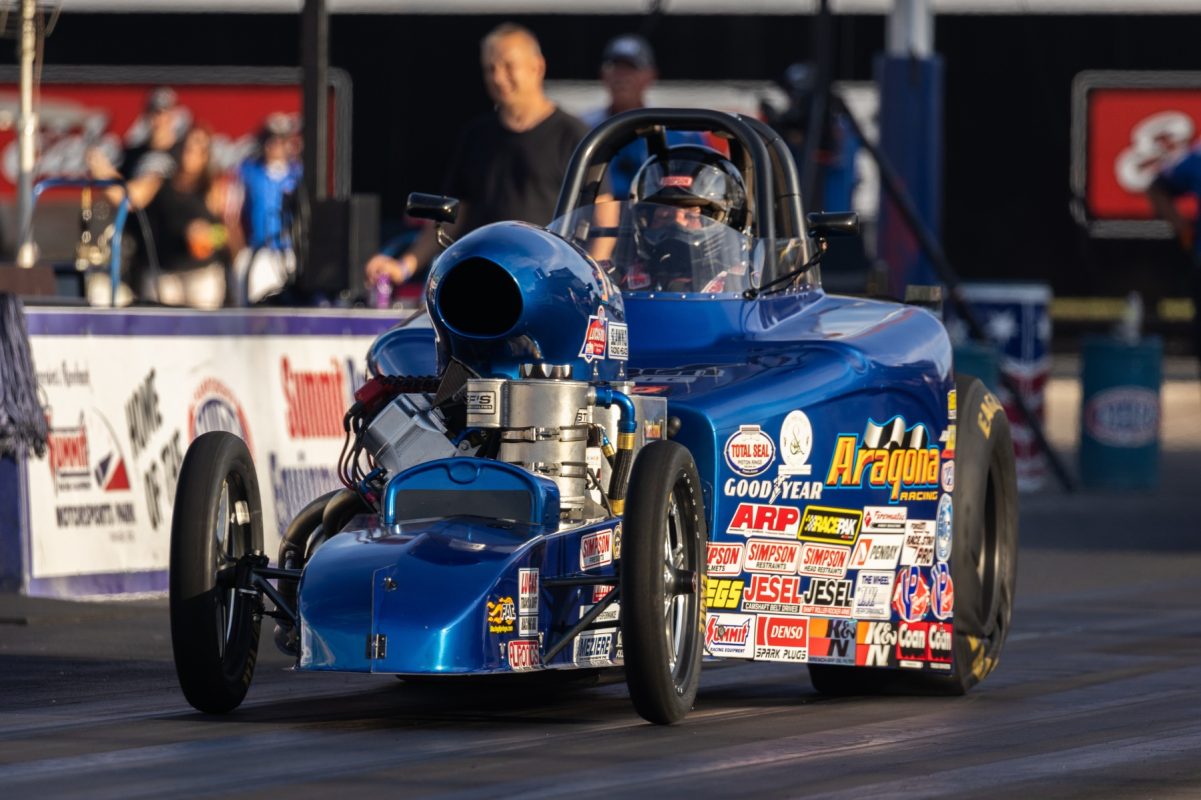 There seems to be increased interest in the category lately; to what do you attribute this rise in competition? 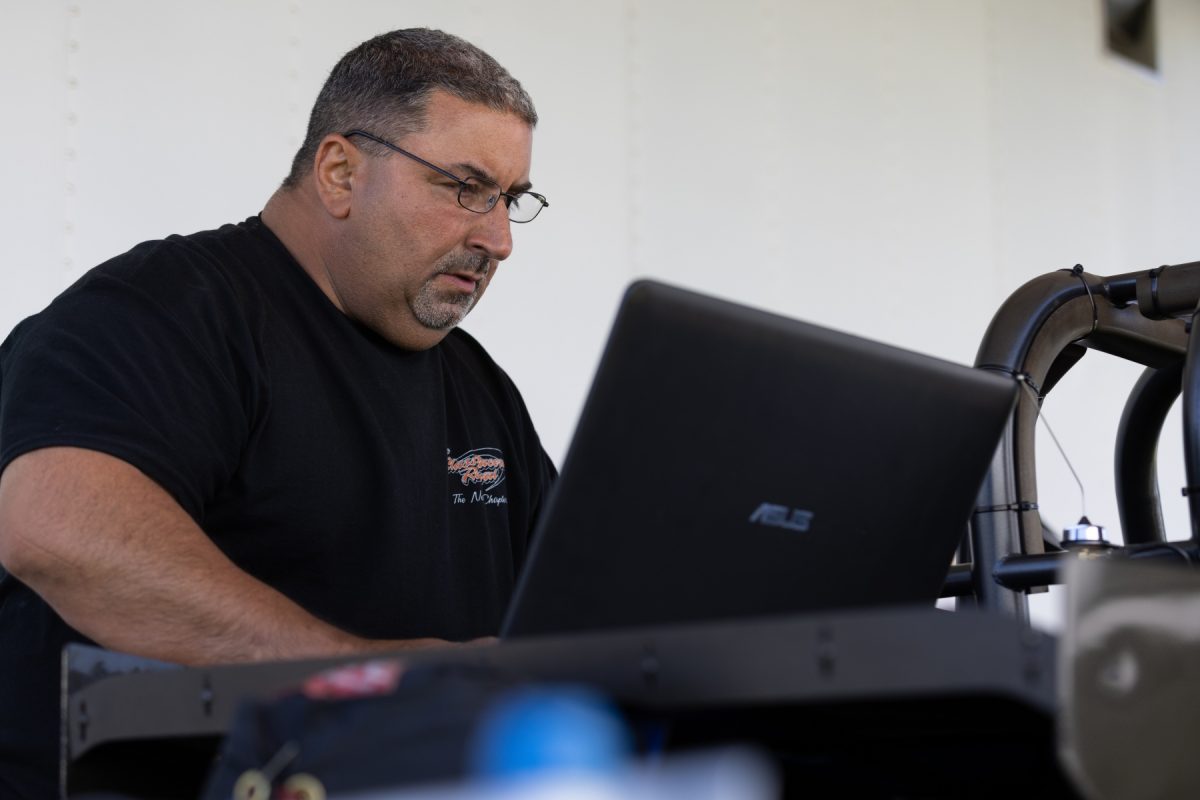 Aragona: Before this current rule package, if someone else hit your index, everybody got hit. Now there’s a window where they can hit the index and not affect the other guy in the same class, and that’s helped increase participation a lot and bring the faster guys closer to the slower guys. In 2016, they also gave everybody a tenth of index, and that evened it out as well. I think that brought some more guys out to race because now they’re more competitive.

Massel: I think it’s a deal where everything is cyclical. People go away and then come back, and maybe this is the part of the cycle where they’re starting to come back. Rodger Brogdon throwing a financial windfall into Division 4 [by starting the Comp Bonus Fund] hasn’t hurt. I personally think it’s a combination of the two.

Greenheck: They’re offering more money in Division 4, and people are gravitating toward that, but I don’t do this to get rich; I did this to get poor. I do this for the competition, and I think that’s what draws people to it. It’s so difficult that when you do succeed, it’s quite gratifying. After you race for a while and get the performance down, then it’s a mental game. That can wear you out, but it’s also enjoyable.

Freeman: Here lately it seems like there’s been some extra money thrown around at the division races, and for a lot of these guys, including myself and all of us, it’s nice to have that bigger purse up there. I know Division 4 put up a lot of money, and they had a bigger car count this year. It’s been good for them. Everybody thinks it’s more expensive to run Comp than doing the Top Sportsman and Top Dragster deal, but if you walk through the pits, those guys have some really, really nice stuff. They’re not sparing any expense over there. I think people are beginning to understand that it doesn’t cost an arm and a leg to run Comp like it used to. You can go out there and be competitive [on a budget], and you can take the car to the finish line without fear of going too fast.

Brogdon: I just think it’s just a natural progression for a lot of racers, especially Stock and Super Stock, to move up to Comp. That’s what it was for me, all the way back to when I ran ET classes. I watched the Nickens boys and thought, “Oh boy, someday I wonder if I’ll be able to do that.” A lot of people are making the move now, and it’s such a great class. It’s full of creativity. Not a real breakout class, but it does have its challenges, and I think that’s just it - people want to make the move up to it. There are a lot of classes in Comp you can run. It’s still expensive, but on a really good Stock or Super Stock budget, you can get over there and be really competitive. 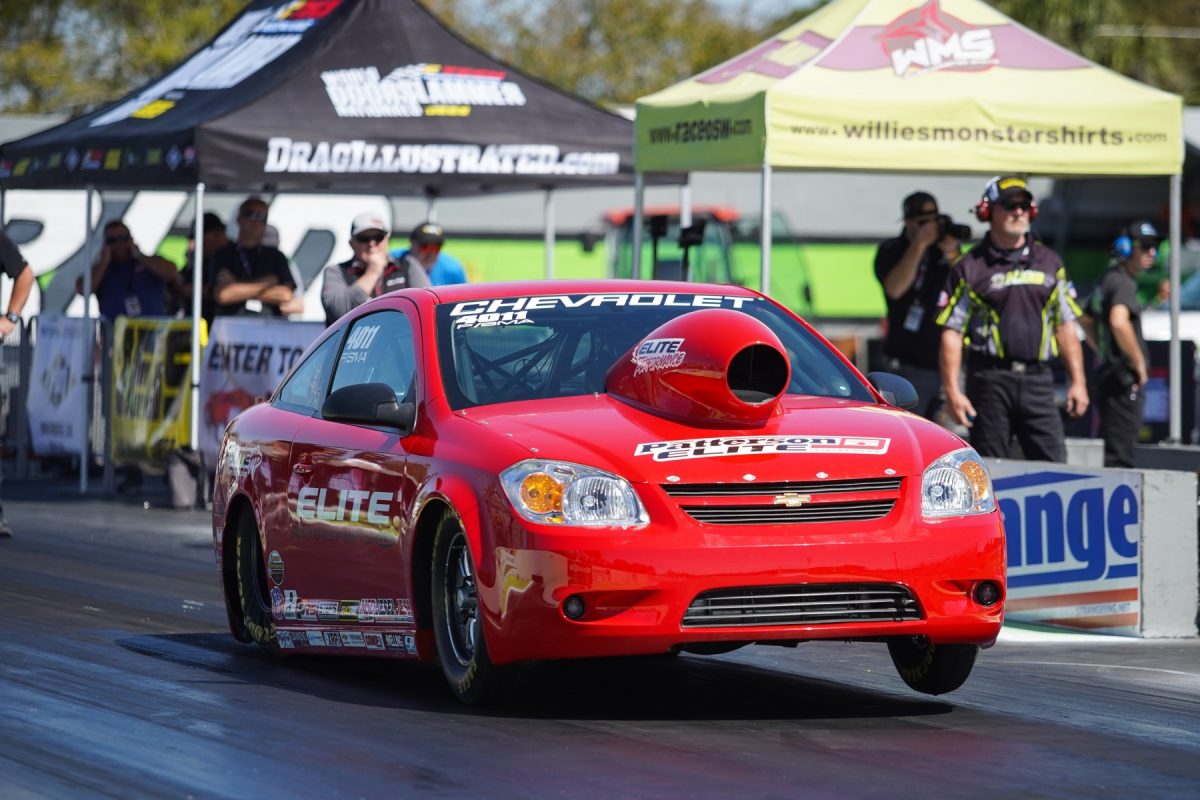 What will it take to preserve Comp Eliminator for future generations?

Aragona: I think the thing missing that could help Competition Eliminator be around forever is somehow getting money put into the class. Years ago, you could win a national event and, if you bought all the right products and supported all the companies that supported the contingency program, you could get like $15,000-$16,000 between the purse and contingencies. Now, you’re lucky if you get $9,000 and the cost has probably tripled what it used to be to run the class.

I’ve been after everybody about this for a long time; you need to bring money into this class. Other people have done the private programs, and you could see the difference in participation. They had full fields at a few events, and a lot more participation than they ever had in that division. Nobody is out here to do this for a living, but if you have a chance to offset some of the costs and get a little bit of what you spent, then that’s a big factor.

Massel: I know it won’t happen any time soon, but it’s been proven that if there’s money there, people will come out. Right now, it’s tough to justify running Comp, even just going down the road. Payouts have gone down, but the costs have gone up astronomically. If there is more money thrown at it, and you can financially justify it to your wife, kids, and your own sanity, that would definitely help.

Greenheck: The organization is not focused on racing; they want to be in the entertainment business. That's their gig, but for the racers, it’s about racing. This is very, very expensive. It’s a hobby gone awry. The focus has been on the Pros, and that has allowed the Sportsman racers to get out of control in a lot of different classes. You have Top Sportsman running quicker than Pro Stock; Top Dragster running as fast as alcohol. These are people that shouldn’t be going that fast, and some of them are in over their heads. 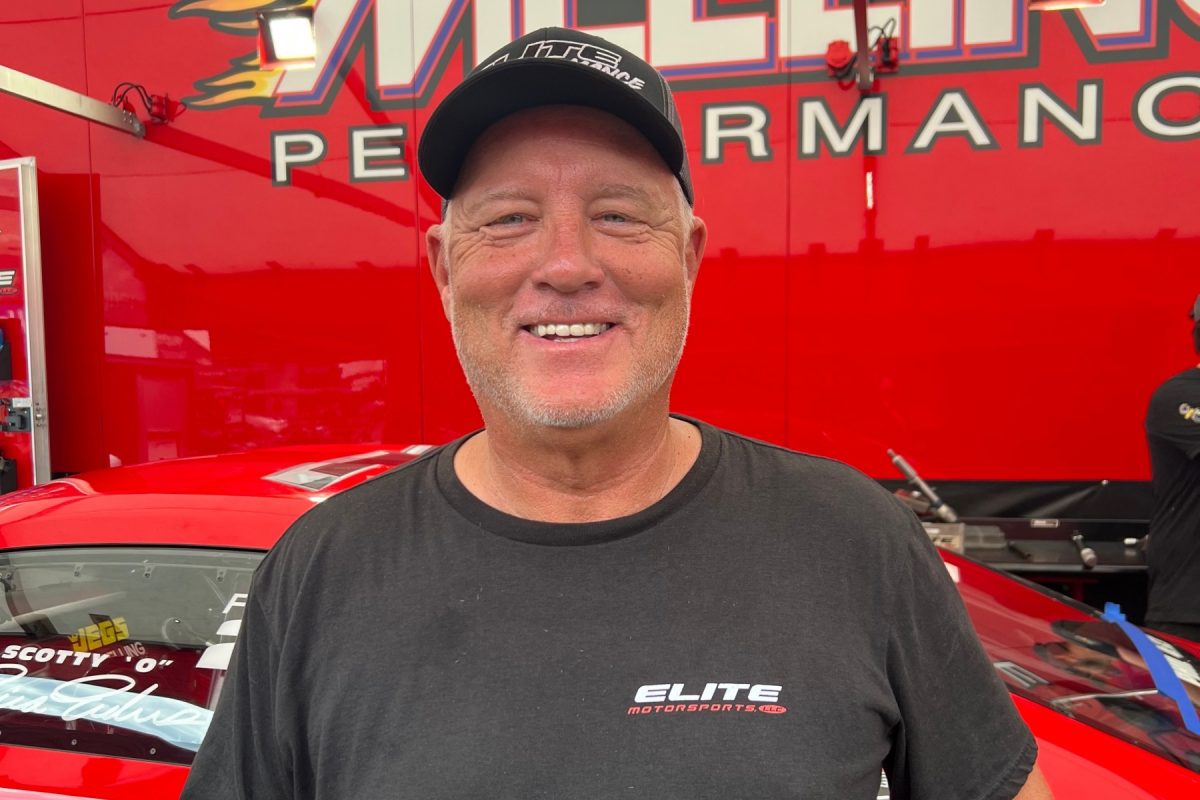 Freeman: The main thing will be, naturally, to keep the cost as minimal as you can. There are a lot of things that are out of our control, as far as parts, supplies, the cost of fuel, and things like that. But I think that the more young people you get involved in Comp, the more you let them understand what it’s really about, I think that will keep Comp alive. I think you’ll see that Comp is growing, getting better, and it’s stronger. In Norwalk, we had 22 Comp cars versus 16 Top Sportsman cars, and that’s unheard of. I think it’s on an uptick, and if people give it a try, I think they’ll really enjoy it.

Brogdon: You have to get paid for participating. If you win a national meet right now in Comp, you might get half as much as what you got in 1987 or 1988, but the cost has tripled. It just comes down to money. I’d like to see that change because this is a great class. You’d be surprised how many people just love it and want to be part of it if the opportunity is there