The one thing the Audi RS3 didn't need was a Performance Edition. With a 0-62mph time of just 3.8sec, 'performance' was never really an issue when you were driving this hot hatch.

Nevertheless, here we are just a year on from the launch of the standard car with a limited-edition run of 300 that ups the ante. It's worth pointing out that this version won't go on sale in Blighty - Audi UK is currently trying to fulfil the orders it has for the normal one (currently running at a two-year wait) so declined to take it.

The fettling is small. Engine power from the five-cylinder turbo is up by 7bhp, while the torque remains the same but the plateau is longer, by 100rpm. Top speed increases by 6mph but the 0-62mph time is unchanged. As I said, baby steps but crucial bragging rights with rivals like the Mercedes-AMG 45. 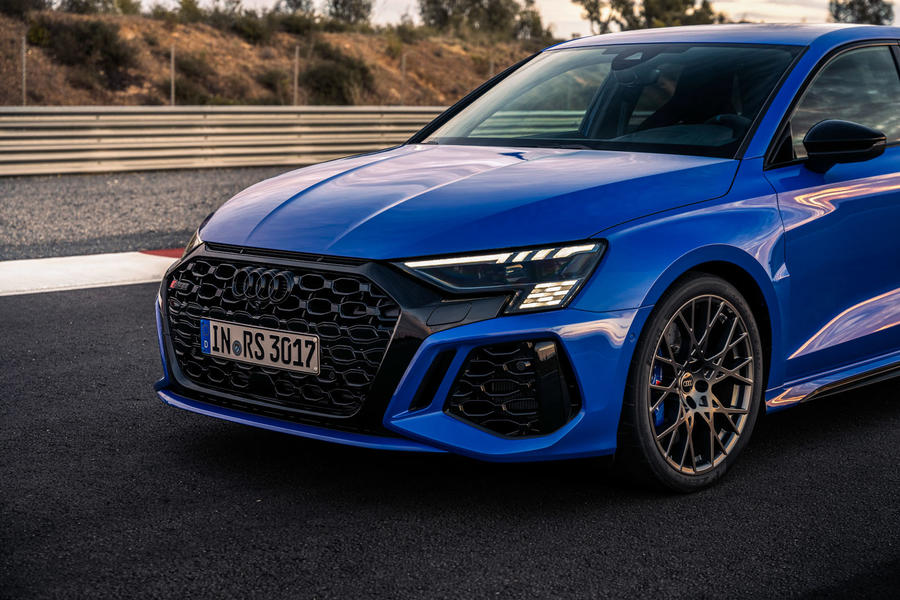 All of this is achieved by a slightly higher boost pressure and it's all reined in by standard ceramic brakes (they're optional on the normal car).

There are nice Easter eggs in the headlights - the LEDs display a chequered flag and '300' on the left and right sides respectively when the car is unlocked. When you lock it, 'RS3' appears instead of 300. There's more - the daytime-running lights appear as chequered flags when driving and even the puddle lights project 'RS3'. Possibly a bit much, but you can imagine your pals being impressed in the pub car park.

Inside, bucket seats are standard and swathed in the usual leather/Dinamica fabric combination, along with blue stitching and colour highlights, like on the 12 o'clock indicator on the steering wheel. There's a carbonfibre decorative inlay on the passenger side to indicate this is a limited edition. 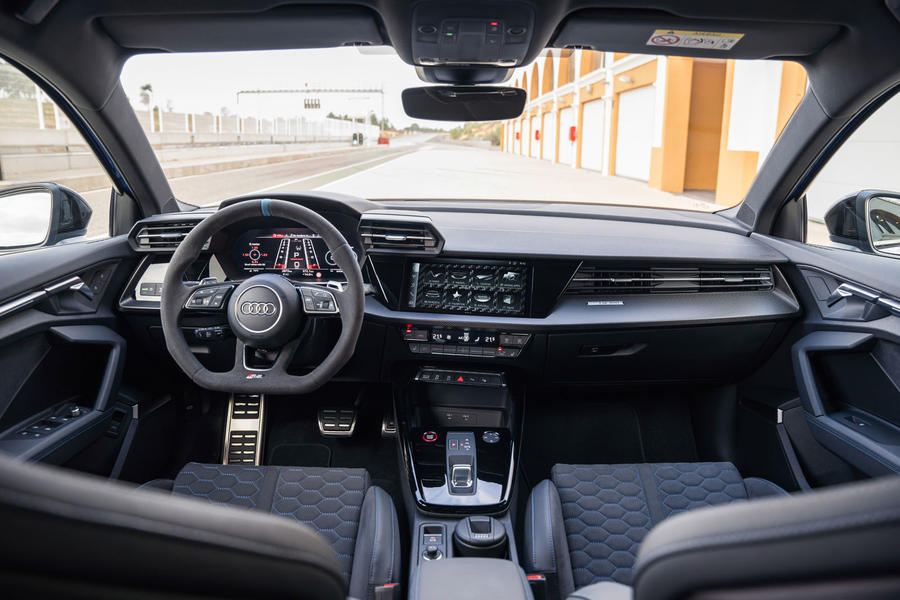 What none of these changes have done is tweak the fundamentals of the RS3. It is still a phenomenally fast hatchback that has more than enough power for any road, but one that still feels a bit blunt in places.

Look under the bonnet and you'll get a clue as to why - the engine is mounted ahead of the front wheels. As a result, it always feels a bit nose-heavy, despite the new-for-this-generation RS Torque Splitter. This can split the torque to the rear wheels, from a maximum of 50% of the total system, pushing it to the outer wheel and allowing the car to drift.

It has certainly sharpened things up from past RS3s because you can use the throttle and power to bring the nose around, so it's now more playful than Audi RSs of old, but not to the point of BMW M adjustability. You don't get that mid-point pivot that you find in BMWs.

Drift mode is hilarious, if you've got the space to play. It's largely idiot-proof so even the most ham-fisted will be rescued by the front wheels dragging you out of trouble. It was most impressive in a high-speed slide because there's such a vast safety net that it gives a huge amount of confidence. That, and the 100m of run-off probably helped.

You can understand Audi's business case for not bringing this Performance Edition here. It's impressive, but not sufficiently different to warrant the effort, and it's also more money on what is already an expensive car. I admire companies for tweaking, almost just for the sake of it, but it is just that and not a fundamental rewrite of the formula.