Ford Escort is ready to focus on the Chinese market 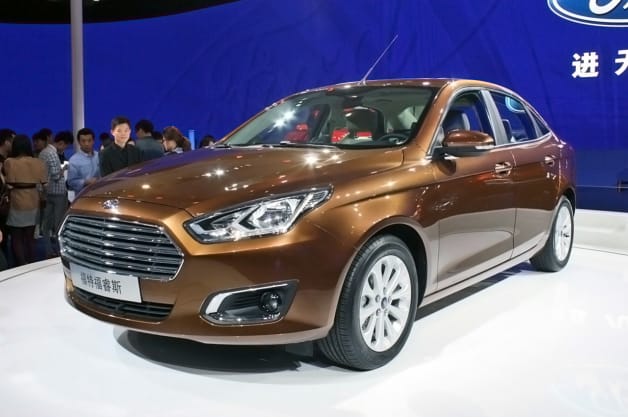 Ford officially revived the Escort name in China, showing of the new, four-door compact at the Beijing Motor Show. Painted in a stylish brown-bronze, the new sedan wears a number of global Ford styling cues while sharing its platform with the Ford Focus.

Power for the new model comes from a 1.5-liter four-cylinder, although Ford doesn't specify just how much power is on offer, simply saying that the fuel economy of the new mill will be "outstanding." It's unclear what transmission will be distributing the engine's power, although based on the images we've seen, the Escort will definitely offer a two-pedal setup.

The layout of the cabin is fairly clean, although as we mentioned in our initial post on the new Escort, it's a decidedly sparser environment than we've grown use to in US-spec Fords of late. If anything, it's like a weird blend of current Ford switchgear with an overall look that reminds us of older Ford layouts. Still, it looks like a comfortable way of moving five people about without too much fuss. There's ample space both front and rear, and a rather spacious trunk.

Take a look above for our live images from Beijing, and then hop below for the official release and images from Ford.

Ford Escort is ready to focus on the Chinese market originally appeared on Autoblog on Mon, 21 Apr 2014 14:28:00 EST. Please see our terms for use of feeds.