We ride shotgun in Gaydon's 10000rpm V12 hypercar, with the man tasked with running the firm behind the wheel

The Valkyrie looks impossible from many angles, and that's doubly true when you're trying to work out how to get into it while being watched by a crowd of onlookers in Goodwood's supercar paddock.

Beyond the high sides of the carbon tub the cockpit seems both tiny and distant. "There's no dignified way to do it," says Darren Turner, the former Aston Martin works racer who has took the Valkyrie for its previous run up the hill course. "Stand on the seat and then slide yourself down."

I make my inelegant ingress and land next to Aston boss Tobias Moers, already strapping himself into the driver's seat. The passenger's side is little more than padding on carbon, and the footwell is narrow, offset by the teardrop shape of the passenger compartment and with an enforced raised-knee position that is more bathtub than car.

Yet it works: I fit, and there's headroom, too - although I will need to pretty much sit on my left arm to give Moers room to work the squared-off steering wheel. A ride in a Valkyrie would be worth a considerably greater level of discomfort.

There are no fewer than four screens sharing the tiny dashboard - two for digital mirrors, which show a sea of mechanics' legs in the paddock - plus a data logger to supplement the central display. The view forwards through the impossibly narrow windscreen feels like it should belong to a jet fighter rather than a car. 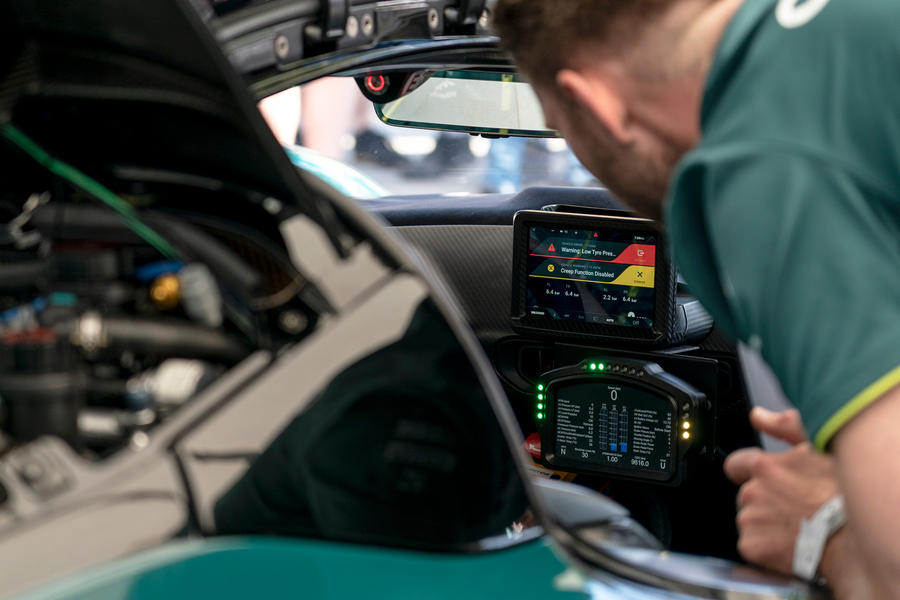 Conversational opportunities are limited at the bottom of the Hill. Moers is wearing the look of concentration you'd expect for somebody about to unleash a 1160hp supercar wearing road tyres on a narrow, damp track. We're also both wearing earplugs inside our crash helmets, and as the engine fires I understand the need.

The starting procedure involves several stages as different bits of the electrical system are progressively energised, with some anxious looks from the support mechanics - the car failed to reach the top of the Hill during two of its previous runs. But it bursts into life on the first press of the start button with an uneven, high- pitched idle and plenty of vibration reaching the cabin from the Cosworth V12 mounted directly behind it.

Low speeds are impressively drama free. Moers manoeuvres the Valkyrie out of its gazebo garage without juddering or complaint, and there is enough steering lock to negotiate the narrow passage between spectators without shunting back and forth. It's not raining, but it has been recently and the sky is a threatening grey. A brief wait at the start with the engine off gives the chance to be briefed on some of the basics. The prototype is running in its Urban mode, with its suspension in it softest, highest setting and without active aero. Then the engine is started again, the doors are closed and I'm compulsively tightening my harness straps as we edge towards the start. 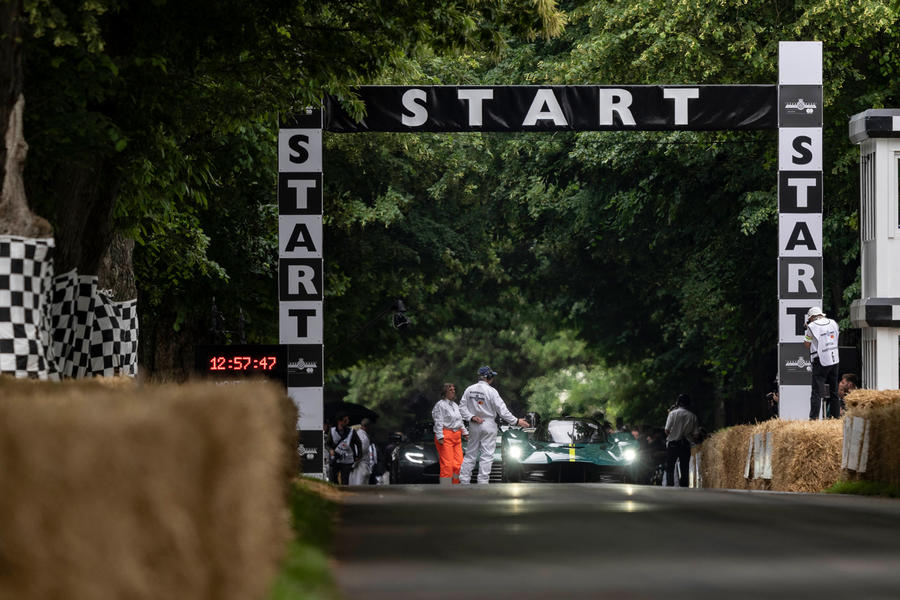 The run is both brief and brutal. The Valkyrie prototype does have traction control, but not very much of it. The cars ahead have been smoking and showboating their way off the line, but as the start marshal raises his hand Moers opts for a gentler approach, getting the car rolling before feeding in the power.

The engine flares and the Aston starts to judder with wheelspin, the rear Pilot Sport Cup 2 tyres battling with the greasy surface. This scrap continues through a couple of savagely fast gearchanges and all the way to the braking zone of the first corner.

By the time we're passing Goodwood House the track is drier and the tyres warmer and I get to experience something close to full acceleration for the first time. The physical forces pushing me back are predictably brutal, but it is the way these combine with the savage scream of the engine - loud even through earplugs - and the buzz through the bulkhead that makes the Valkyrie feel truly outrageous. The data logger's tachometer reports a couple of trips to the high 9s. More than 1000rpm short of its limiter it sounds and feels amazing.

Moers picks a sensibly cautious braking point for Molecomb - "the place where everyone crashes" as he said before the run - and the Valkyrie takes the corner without drama. But there's more excitement at the fast right-left kink that follows, next to the infamous stone wall. The transition between the two turns brings the unmistakable sensation of oversteer and Moers is busy with an urgent dose of opposite lock. My heartrate peaks. 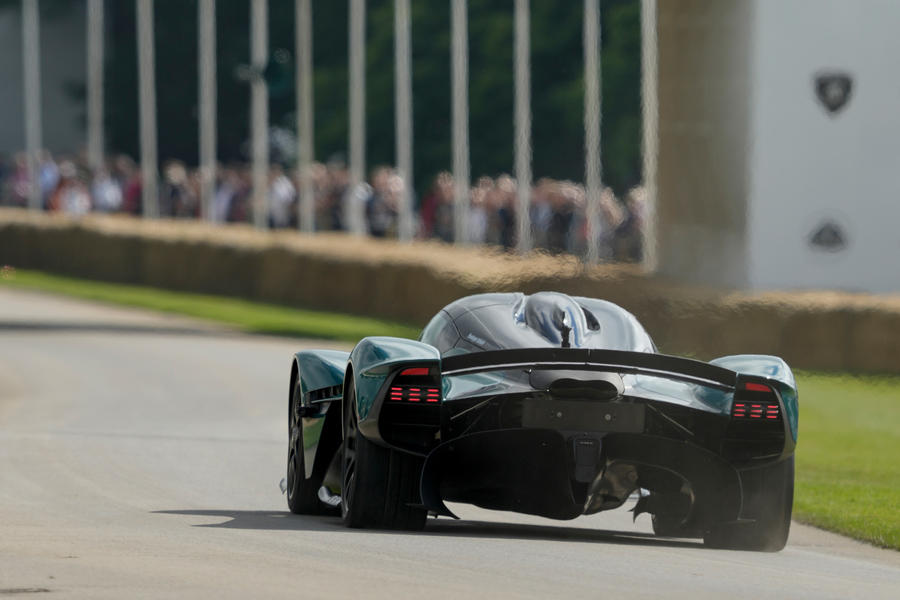 Unsurprisingly, we take things easier from then on, Moers working the engine hard in lower gears to please the crowd, but keeping speeds well short of what the car could doubtless do. We're not being timed so the Valkyrie can't win anything. But it could definitely lose spectacularly with a highly public off, especially with the boss driving.

The top of the Hill and the turn-around area brings elation, Moers is actually laughing as he pulls off his helmet for what will be his only drive of the Valkyrie here.

"It's an unbelievable car. If you drive it somewhere like Silverstone you can push much harder, you can't do that here of course," he says, "traction is an issue, it's true - you felt that - but handling is amazing. I never thought it would be so easy, I expected a really tricky thing to drive, but it's smooth even if it oversteers. There's no snap in the car."

How does it compare to the AMG Project One he commissioned in his previous role as head of Mercedes' performance division? Moers is possibly the only man in the world who has experienced them both.

"They are completely different," he says, "they couldn't be more different. But which would I rather drive here? You don't need to ask that, do you?"