Honda Concept B Hybrid production version coming to China in 2016 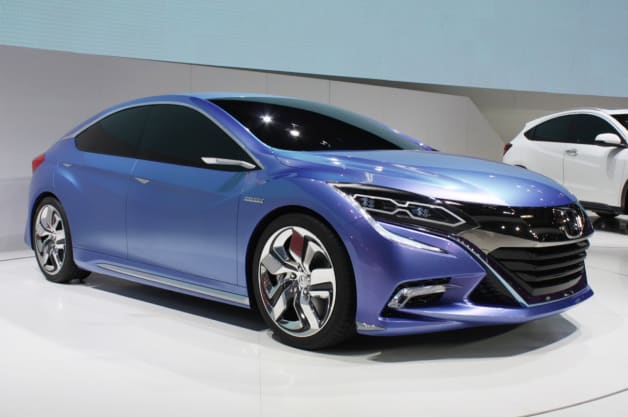 At the Beijing Motor Show this weekend, Honda took the wraps off of the Concept B Hybrid, a "new-value concept" that will apparently do its level best to get the Japanese automaker back into the entry-level gas-electric game. Powertrain details for the five-door concept hatch are noticeably absent, so we are assuming that what Honda wants with this concept is for us to focus on the looks. Honda says the car's exterior design is "advanced and cool-looking." We like the shape, but think a few changes will do wonders for the production model.

If the busy front end gets turned down a bit in production (it's especially glaring from the front), we can see this becoming a darn good replacement for the Insight at the lower end of the hybrid price spectrum. Sadly, for now, Honda is saying that the mass-production model that uses the Concept B as a foundation will be available "exclusively" on the Chinese market in two years.

Speaking at the Beijing show, Honda president and CEO Takanobu Ito continued to look for ways to green his company's line-up, and said Honda, "will strive to become number one in complying with Chinese CAFE regulations, which are the toughest in the world, and offer a new lifestyle for Chinese customers." Come 2016, that new lifestyle could look like the car you see in the gallery above. Think it's a good one?

Honda Concept B Hybrid production version coming to China in 2016 originally appeared on Autoblog on Mon, 21 Apr 2014 10:28:00 EST. Please see our terms for use of feeds.